You are here: Home / Fiction / Action & Adventure / League Of Angels by Thomas Tan 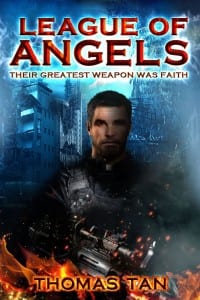 They said that God didn’t exist. They said that the time for religion was over. If mankind was to progress, the human race had to be purged of superstitions. Like everyone else, Chelsea Shields believed the Lumen Corporation, even when they hunted the faithful to extinction. What did she care? She had no sympathy for fools and fanatics. But the grisly death of her brother was about to change all that. Freed from bondage and forced on the run, her only hope for salvation lies with three mysterious priests known as the Archangels. Armed with prayer, sacred rituals and a truckload of guns, these fugitives from the Underground Church vow to save her from the armies of Hell. But can she really trust these men to protect her? Surrounded by treachery and intrigue, and pursued by seven demons, she finds herself drawn into a world of despair. To survive the night, she has to confront her deepest fears. And do all she can to recover her faith before it’s too late.

League Of Angels is an adrenaline-pumping ride into the supernatural, combining heart-stopping action with mystical folklore and facts, truth and fiction to create a compelling tale of loyalty, faith, courage, and sacrifice.

What Advice Would You Give Aspiring Writers?
Don’t ever give up. Be true to your vision, keep plugging away, line after line, page after page, no matter how challenging it can sometimes get. And before you know it, you’d have finished your first novel.

Author Bio:
Thomas Tan was a former advertising man and Creative Director for HBO Asia, who adores classic adventure sitcoms and Sunday morning cartoons. He has written widely for print, radio and television, and has won various awards at Promax Asia and the New York Festival of Arts. He currently lives in sunny Singapore, surrounded by good food, great friends, and a beautiful princess to love. When he’s not chasing gigs as a corporate scribe and television producer, he enjoys building castles in the air, with dragons to slay, demons to vanquish, and maidens to save. League Of Angels is his debut novel. Check out www.facebook.com/LeagueOfAngels for more updates on the League.