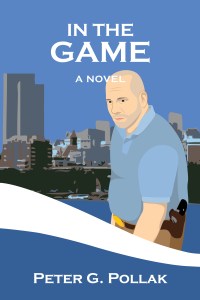 A man wakes up in a hospital unable to remember his name or recall how he got there. He learns his body was discovered near death in a gully on a rarely-traveled road in the Adirondacks. Slowly, he realizes that whoever tried to kill him may try again and that he is defenseless since he has no idea who or why they’re after him. With few resources and only one or two friends in the world, can he survive or will desolation ridge be his last stop?

What Inspired You to Write Your Book?
Two things: Desolation ridge is my name for a real place on a rarely-traveled road. It is actually very beautiful under the right conditions–a warm sunny day, but at night alone and injured, its desolation makes it closer to the doorways to hell.
My second reason is that a store in the Adirondacks which I asked to carry my books would only do so if they were about the Adirondacks. So I wrote one set in the Adirondacks. It sold well and now they’re carrying my other books as well.

How Did You Come up With Your Characters?
The main character is someone who is the victim of a terrible crime. He only survives through luck, but when he’s released from the hospital he finds himself without a job, living on temporary assistance, with few prospects. He has to find a reason to live and the means to survive when he has no idea who wants him dead.

Book Sample
Prologue
(October 27, 2003)
“I won’t do it,” Logan Gifford, Tekram Corp’s Comptroller, said emphatically. He stood up and started to walk out of the conference room.
Before he reached the door, two of Security Chief Everett Lipton’s men grabbed him and forced him back into his seat.
“Wrong answer,” Lipton said.
“Take your hands off me,” Logan yelled, squirming to get out of their grip.
“Hold him still,” Lipton said. One of the men put Logan in a headlock. Ignoring his screams, Lipton took a syringe off the table and jabbed the needle into Logan’s neck.
Logan went slack as the chemical entered his blood stream. While one of Lipton’s men secured his hands behind his back with plastic handcuffs, Lipton and the other man set up a video camera mounted on a tripod pointed at Logan. A computer monitor was placed on the conference table. When everything was in place, Lipton used his cell phone to call his boss. “He’s ready.”
Things were happening too fast for Logan Gifford’s brain to keep up. He looked around the room trying to remember where he was. The monitor in front of him showed the outside of a large house. It looked familiar.
Three men entered the room. One was his brother-in-law Craig Harkness––the man who’d gotten him the job with Tekram Industries. Lawrence Zander, Tekram’s CEO, followed with a third man––an African-American gentleman whose face looked familiar, but whose name Logan couldn’t place.
Logan realized that Zander was talking to him, but he had trouble parsing the words.
“Mr. Zander. I don’t understand what––”
Zander leaned over in front of Logan. “Logan! Listen to me.”
He wanted to tell him there was no need to shout. Zander was saying something about his family.
“I know you care about your two little girls, Logan.”
He thought of his daughters––Meghan and Sissy. He nodded, still not understanding.
“Look carefully at the TV screen. Do you recognize that house?”
It looked like his house, but why would they be showing it to him?
“If you do not do exactly what I tell you,” Zander said, “something very bad is going to take place in your house.”
Nothing made any sense to Logan. His head was swimming. He closed his eyes.

About the Author:
After retiring from a career as a journalist, educator and entrepreneur, I decided to try to finish one of the many novels I’d started in the past. Readers liked the first one–The Expendable Man–a thriller I self-published in 2011 and as a result, I’ve kept writing. Last Stop on Desolation Ridge is my third novel. My fifth–House Divided–another thriller, will be released early in 2015.