You are here: Home / Fiction / Romance / Last Exit to Montauk by Phillip Vega 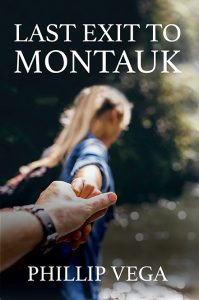 When he approaches her at the market, he has no idea the next three weeks of his life would change him forever.

It’s the late 1980s, summertime, on the North Shore of Long Island. The air stirs with possibilities as it often does during this time of year.

And so begins the romance between one Hispanic seventeen-year-old male, on the verge of manhood and ready to conquer the world, and one beautiful and intelligent young blonde woman named B.

It is much more than romance, though. B will forever become a part of this young man’s soul. He will never forget her.

This is a coming-of-age story, a love story, replete with milestones, tangled emotions, and adventures that are the embodiments of first love. Not just for the young, but for the young at heart.

What Inspired You to Write Your Book?
My novel is a coming-of-age love story, based on Long Island during the summer of 1986. Though the main characters are in their late teens, this is not classified as a new-adult novel, though it certainly could appeal to readers in that category.

Instead, I see it as a love story for any age. And my readership thus far attests to that, talking about memories of first love, or Long Island, or summertime anywhere, or the icons of the 1980s—or all of the above. According to my them, Last Exit to Montauk had them laughing and crying in the beat of just a few pages.

I share this because the inspiration to write it was a fluke. I did grow up on Long Island in the 70's and 80's, so I suppose that inspired me, but that's not all.

It all started when my wife and I came home from grocery shopping, and after putting away the groceries, she turned in for a nap with the dogs, while I plopped myself in front of the TV with my iPad. Even though I have about a million channels, nothing struck my fancy, so I opened “Notes” in my iPad and started typing up the story that was playing in my mind’s eye.

Fast-forward six weeks: I had close to 800 pages written, and no idea what I was going to do next.

How Did You Come up With Your Characters?
They simply came to me as I sat down and started typing. Again, it was a fluke. As I started typing away in Notes, on my iPad, the novel began playing out in my head, like a movie or video, replete with the musical soundtrack.

Each character were already developed. All I had to do was transcribe what I saw in my mind's eye to the page, and then get out of the way. I compare it to the way sculptures sculpt stones. The work is already there. All they're doing is chipping away at the pieces that don't belong, and once they're finished, the piece delivers itself for the whole world to see.

Book Sample
The bowling alley was located at a strip mall near my house. We checked in with the guy behind the counter, who assigned us a lane, then gave us each a score sheet and a pair of really fashionable bowling shoes. You know the ones. Red and black separated with a white stripe down the middle, white soles, shoe size emblazoned on the back. To this day, they still remind me of clown shoes.

We found a couple of black bowling balls and put them in the ball return area. I placed the score sheet on our bowling desk and wrote our names down.

Back then we didn’t have electronic scoreboards, so you had to know how to keep score. You had to know the difference between a strike and a spare, how to score it properly, and what happened in the last frame if you threw one. Of course, each table had the rules written down, so if you didn’t know how to keep score, you could read the directions and learn the rules. It was bowling, not rocket science.

We were playing the best of three. Like tennis, the loser would buy pizza. “And don’t take it easy on me. I plan on winning again,” she warned me, grinning.

I laughed. “Oh don’t worry; I don’t plan on losing two days in a row. I hope you brought your wallet.”

I wasn’t much of a bowler and only played now and again. I was lucky if I broke a hundred, but don’t judge. How many famous Hispanic bowlers do you know? I bet you could rattle off a few hundred Hispanic baseball or soccer players though, right?

Besides, most kids in the neighborhood didn’t come to the bowling alley to bowl. We came to play video games. I remember when they got Ms. Pac-Man. Adults and kids would put their quarters down on the lip of the machine and patiently wait their turn. While you waited, you could play another video game, like Asteroids, or play pinball.

They had the classic pinball games like Kiss and Pinball Wizard. Today, it’s all about X-Box, iPads, Sony PlayStation, and online computer games. Man, times have changed. But that day, we were there to bowl.

She bowled first. She did a quick stretch, blew into her right hand, and picked up her ball. Before making her approach, she bent over and stared down the bowling pins as if to say, “You’re mine.”

She inhaled, held it, and exhaled. Then in a very fluid motion, she took a few steps and released the ball, knocking down nine pins. She twirled around, smiling, and looked over at me, raising her eyebrows.

“I hope you brought your A game!”

I just smiled back. Her ball returned, and she picked it up. She went right back to her previous spot and picked up her spare. She yelped and did a fist pump. She then turned around and bounced back to the bowling table as if it were no big deal. So, she can bowl. Who knew?

Maybe she got lucky. Yeah, that’s what it was—luck. Just like tennis yesterday. Luck.

“Do you know how to keep score?” she asked.

“Yeah, I know how to keep score. This isn’t my first time bowling,” I replied. It’ll only look like it.

We spent the rest of the afternoon bowling without a care in the world. Strike! Spare! Gutter ball! Seven/ten split! Spare! We laughed. We high-fived. Most importantly, we had fun. We only played two of our best of three games. Yes, Charlie Brown lost again . . . sigh!

I just laughed it off. Besides, she had distracted me with her awesomeness.

“So where do you want to go for pizza?” she asked.

On Long Island, every neighborhood has a locally-owned Italian pizzeria in every shopping center. You had Tony’s, Vinnie’s, Mario’s, Johnny’s, and an assortment of other places that were names ending in a vowel.

The very best pizza on the planet, in my opinion, was our neighborhood’s local pizzeria—Giuseppe’s.

If you want to get into a pissing contest, make the mistake of saying your pizza place was better than someone else’s. You know the expression about never discussing religion and politics? Well, when you’re on Long Island, add pizzerias to the list. You will argue for hours.

When the pizza chains started to open up, people would order from them only if they didn’t feel like driving, or were in a jam; otherwise, people looked down their noses at those places. You never admitted to
ordering from Domino’s, or being seen in Pizza Hut.

It wasn’t raining very hard, so we walked a few stores down to Giuseppe’s Pizzeria. We ordered a couple of slices each and Cokes and found a booth toward the back. And that was how you ordered it: “Let me get a couple of slices and a Coke.”

Back then, you didn’t have a great selection. You couldn’t order a Hawaiian slice or a Meat Lovers slice. Gourmet slices like goat cheese and truffles or escargot pizza were not yet in vogue.

For those of you wondering, yes, I was the one who once had eaten escargot pizza. Yes, it was awful, and yes, there was a girl involved. Fortunately, the girl I was trying to impress that day, still agreed to marry me the in the mid-’90s. The lesson I learned that day? Don’t be a shmuck! When in doubt, go with pepperoni.

“Did you let me win again?” B teased.

“You were there. Did it look like I let you beat me? Besides, you only beat me the last game by two pins. And I do recall someone coughing real loud as I threw my last ball. I’m not making any accusations or
excuses, mind you, I’m just saying.”

She tried to hide her smirk.