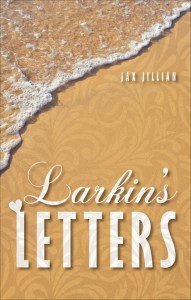 As Ryan Boone struggles to come to grips with not being able to keep a promise he made to his dying wife, Larkin’s Letters propels readers into the mind of Ryan as he struggles with frequent visits from her ghost and a series of letters she leaves behind. Ryan worked hard to become one of Hollywood’s most sought-after actors, but no matter how busy or famous he became, he always remained loyal to his childhood best friend, Larkin James. When Larkin is diagnosed with leukemia, Ryan sacrifices his career to be by her side and in turn realizes how much he had always loved her. Throughout Larkin’s sickness, Ryan promised that he wouldn’t let her die alone. But we learn that not all promises are within our control.

What Inspired You to Write Your Book?
Suzanne’s Diary to Nicholas by James Patterson is the only book I read cover to cover and after I read it, I knew I had to write a love story that could touch an audience the way that book touched me. I love reading love stories that pull at readers heart strings and I wanted to be able to write a story that could mean something to somebody.

How Did You Come up With Your Characters?
My characters really created themselves. I wanted my male character to be larger than life, someone that everyone would want to know if he was real. I wanted him to be imperfect but a hero at the same time. My female lead was someone that I wanted to be strong but vulnerable too. I think I was able to capture that and more.

Book Sample
“I left you something on the nightstand,” she said.
“You did? What is it?”
“Just turn over and look,” she pleaded.
He turned over to look, hesitantly, not wanting to look away from her. She always seemed to disappear every time he looked away. A manila envelope lay atop the white rustic nightstand and the word “Ryan” that was penned across the front was beckoning him. He glared at the envelope for just a moment before turning back to her. But she was gone.