You are here: Home / Fiction / Landfall by Joseph Jablonski 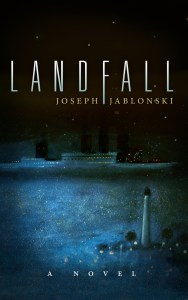 Landfall is the story of Jake Thomas who has finally come home from a life at sea. He has settled into a comfortable retirement and even has a new wife. Yet a secret from Jake’s past can undo it all. On Jake’s first sea voyage more than forty years ago, a woman was murdered and now her children seek answers from Jake. Does he know what really happened? Did the wrong man go to jail? Can they trust him to finally tell the truth?

Written in a style that compares to Joseph Conrad and James Patterson, Joseph Jablonski drew upon his thirty years of sea experience to craft a book of mystery and intrigue.

Joe died suddenly last May before he could contact a publisher. His wife, Darlyn, and son, Peter, have worked to get this book published and fulfills Joe’s dream.

What Inspired You to Write Your Book?
During Joe’s years at sea, he heard many wild and wonderful stories. He was a terrific story teller and was encouraged by other writers to get his stories down on paper. At the age of 50, he began writing. Part of the novel comes from a story he heard that happened on another ship, not one under his command.

How Did You Come up With Your Characters?
Note: Because the author died before his family contacted the publisher, these questions can only be answered with quotes from the book.
“Mariners, particularly captains who are privy to most everything that happens on a ship, see things both terrible and
wondrous throughout their careers. Natural wonders as well as instances of human behavior we can tell only to other mariners, men who smile knowingly, shake their heads, and pour another glass of cognac.”

Book Sample
“Looking out at the gray day, at the beginning of the long rainy season, I am reminded of the sea, how each voyage is a
separate lifetime, with a beginning, a middle, and an end. Aboard ship, we log the details of the journey. I want no such record of this undertaking.”

About the Author:
Joseph Jablonski was born in 1948 and spent 30 of his 66 years circumnavigating the world on an odyssey that would bring him to test the limits of his courage and stamina.

At age 50, Joe relinquished his role as captain for that of writer. This story, and Three Star Fix that precedes it, reveal the heart of a man engaged with the world, undaunted by its challenges, and at peace with his own nature.

Joe passed away suddenly in May 2014 from natural causes. He left behind several unpublished manuscripts including LandFall. His wife, Darlyn Jablonski, and son, Peter Jablonski, worked to have published LandFall posthumously as one of Joe’s great aspirations was to get more manuscripts published.

Joe grew up in Nebraska, graduated from the US Merchant Marine Academy in 1970, then pursued a career in the merchant marines. He rose to the top of the ranks and retired after sailing several years as Captain of APL’s MV President Kennedy containership in 1998. Joe was a lover of life. He loved dinner parties, travel, tennis, scrabble and adventure. He is greatly missed.

Links to Purchase eBooks
Link To Buy Landfall On Amazon