You are here: Home / Fiction / Romance / Knights of Stone by Lisa Carlisle 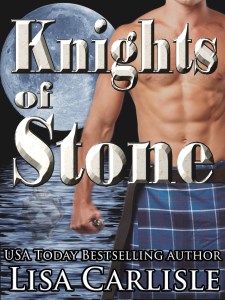 Gargoyles, tree witches, and wolf shifters have divided the Isle of Stone after a great battle twenty-five years ago. When Kayla, a tree witch, hears about the unconventional rock concerts in the gargoyle’s territory, she sneaks from her coven and into their territory to see for herself. Night after night, she returns to see one in particular shift into human form and play guitar at these unconventional shows.

For several nights, Mason has kept watch for the pixie-like female. He plans to seduce her, thinking she’s a visitor from another island. When he discovers she’s one of the tree witches, he retreats, attempting to keep his distance. The temptation is strong, but forbidden.

Kayla and Mason attempt to meet in secret, but other elements on the isle command their attention. A magical cloak created by the three clans on the island is thinning, leading to repercussions for all the clans. Kayla and Mason are caught in the middle of it, and their actions may change the fate for all.

What Inspired You to Write Your Book?
I thought of an island hidden from other humans where gargoyles, tree witches, and shifters shared.

How Did You Come up With Your Characters?
Mason is one of the gargoyle statues. I thought about what he’d like to do once he became animated to flesh.
Kayla is a tree witch who is forbidden to cross to the gargoyle land. I thought about her being curious and what would happen if she acted on it.

About the Author:
Lisa loves stories with dark, brooding heroes and independent, caring heroines. She feels very honored to be a multi-published author since she’s wanted to write since the sixth grade. Her travels have provided her with inspiration for various settings in her novels, including deployments while she served in the Marines. She lived in Parris Island, the California desert, and Okinawa, Japan. She also backpacked alone through Europe, and lived in Paris, France, as an au pair before returning to the U.S. and buying a book store. She now lives in New England with her husband, two children, a cat, and many fish.