You are here: Home / Fiction / Keira in the Valley by Lorna Thomas 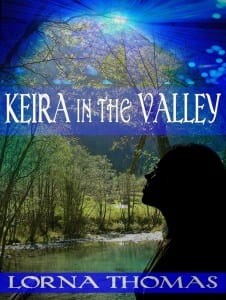 Keira lives with her clan in a valley shut off from the outside world. The valley is ruled by Mother Arbao according to her strict and exclusive interpretations of an ancient book of laws. The adults are forced to endlessly labor in the silver mines while the children and young adults gather the golden grain that makes up their only food source. At night the children diligently recite verses from the book in hopes of one day becoming one of Mother’s trusted helpers. Although the children and young adults around her seem happy and content, Keira’s spirit is troubled by their way of life. One day while gathering water for morning tea she is drawn to the river where she discovers a long-forgotten food source forbidden by the laws of the book. She battles with her conscience but ultimately decides to consume the food. Her awareness grows and she soon finds herself on a journey of spiritual discovery that imperils the entire valley as she struggles to uncover the truth behind Mother’s treacherous reign and the ancient book of laws.

How is Writing In Your Genre Different from Others?
This is my first full-length novel. I wrote for years on FanStory and have written poetry, horror, humor and general fiction. For me, the process of writing something that is spiritual or metaphysical is very cathartic. I found myself writing best when I reached an almost meditative state and could separate from the demands and realities of life.

What Advice Would You Give Aspiring Writers?
Just keep writing. I have a tendency to look at a big project and over-complicate the process, thereby putting up mental stop signs that prevent me from going forward. Writing is a process. You can’t write it all down in a day or a week. Set reasonable goals and a reasonable work schedule and stick to it. Also, don’t compare your writing or your results to anyone else. While it is good to read other books in your genre, don’t get too caught up in comparing your work to others and thinking that you have to write like ‘this’ or ‘that’. This will only serve to frustrate you and stifle your unique voice and style of writing.

Author Bio:
Lorna Thomas’s very first loves in life were dogs and telling stories. She used to sit up all night long telling stories to her younger sister. The stories existed only in her imagination and although she never wrote them down, she still remembers some of them to this day. She also remembers every single dog she’s ever met or lived with. As a child, when her father planned to visit friends or relatives, her first question would be ‘do they have a dog?’ If they didn’t, she really wasn’t much interested in visiting unless they had other animals! Today, Lorna trains dogs in a sport called Schutzhund. She also raises and trains dogs for police K9 and narcotics detection work. She is the CEO of a small business that sells business management software to manufacturers. She enjoys training dogs, cycling, hiking, snowboarding and pretty much anything outdoors.

What Inspired You to Write Your Book?
I was hiking in the wilderness in southwest Colorado and came across a beautiful valley that seemed completely isolated and untouched by man. It was a time of spiritual awakening for me in which I began to realize that a lot of the guilt I carried over my life had been placed there by subscribing to strictly held beliefs on religion and the concepts of good versus evil, heaven versus hell, right versus wrong. One night I had a dream about an isolated valley where people were forced to live according to one person’s interpretation of how their lives and spirits should be governed.