You are here: Home / Fiction / Mystery/Suspense / Karma Dead Ahead by D.H. Montgomery 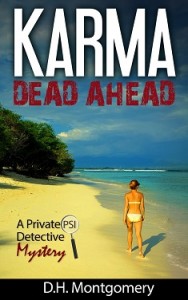 “Karma Dead Ahead” is a nicely paced detective/mystery story with appealing well-drawn characters and a plot that always keeps you guessing as it alternates between humor and suspense.

Two graduate students in a university paranormal research lab become accidental detectives as they go searching for a woman who fails to return from her Caribbean vacation. They get help from a group of psychics known as the “Gang of Four” and a hi-tech witchcraft practitioner. The psychics reveal that a karmic debt from two hundred years ago has put the woman on a path to danger. After some brilliant deductions and twists and turns, the two detectives come face to face with a deranged killer and his intended latest victim. Just as karma set off the chain of events in the beginning, it also determines the dramatic outcome.

“Karma Dead Ahead” is not just another Detective Mystery/Suspense novel. There are a number of incidents that take place that humorously satirize the corruption and dysfunction of modern institutions — the media, celebrity worship, the scientific establishment, business and elite protection from law enforcement — giving the novel depth and comic relief from the more suspenseful main plot.

What Inspired You to Write Your Book?
My latest book is “Karma Dead Ahead.” What inspired it was the entire plot of the book popped into my mind one day in June 2014. Prior to that, I had never written any fiction, not even a short story, nor had I intended to do so. Since I had an entire novel in my head, I typed it out as quickly as I could. It took five weeks to produce the full 250 page book. Real-life paranormal events were taking place in my home during this time. These included poltergeist activity before the book was started and the appearance of a ghost after it was finished (he has not reappeared since).

How Did You Come up With Your Characters?
The characters were all thought up all at once along with the plot in one day in June 2014. A perceptive reviewer on Amazon noted that every character could be paired with another character and the pair represented contrasting aspects of a certain personality type. The two detectives demonstrate this quite well. The female detective, Sagacity Jeunesse is a bold, charge ahead, get things done type. Her male partner, Chance Mankowski, is more intellectual and contemplative. They have a push-pull relationship as another reviewer pointed out.

Book Sample
The two budding detectives found her unit on the second floor. It didn’t take long to locate the computer, nor to find out that the website that had been mentioned didn’t contain the information which was promised. This website, “Island Romantic Connections,” looked innocent enough. It wasn’t surprising Amanda was using it to find some male companionship for her tropical vacation. Obviously, she met this guy Rodrigo on it and they clicked. Did he specialize in luring unsuspecting women to some isolated island retreat, having a good time with them and then disposing of their bodies after murdering them?

“Well, this is disappointing that there are no messages left on this website. Let’s read the note Amanda left for us and collect the material for the psychics since we will be seeing them tonight.” Sagacity opened it, and started reading it to Chance:

“The material for the psychics is in bags that I’ve left by the computer. You should also go to my bookshelf and look in the fourth book from the left in the top row. You will find enough money in cash to pay for two plane tickets to Capo Barbuda. A reservation has already been made on flight #777 on Pan Caribbean Airlines at 3:15 PM tomorrow. The reservation number is…. You need to confirm it and pay for it online or by phone. You have a hotel reservation at the Bougainvillea Guest House. You also need to confirm and pay for that. There should be more than enough money to cover everything.”

They both looked at each other dumbfounded, with each saying at the same time, “How can we just drop everything and go to Capo Barbuda?”

Expressing his naturally cautious personality, Chance blurted out, “This is beginning to sound potentially dangerous.”

Rarely being put off by any new development, Sagacity replied, “Relax, it could be an enjoyable trip. Besides, how are you going to afford going to Capo Barbuda on your graduate stipend salary? This is a wonderful opportunity for both of us. You have a passport I assume? I had to get mine when I went on a trip to study the Mayan ruins,” Sagacity said. Chance replied that he had one too because he spent a semester abroad in Russia when he was an undergrad.

Since Chance was taller than her, being 6‘2”, Sagacity asked him to go get the book off the shelf so they could see how much money was in it. He reached for the book, took it down and put it on a table. They saw that it was not an actual book, but one of those safe-type books with an empty interior. When they opened it, a large number of hundred dollar bills fell out. Sagacity and Chance’s eyes opened wide when they saw all the money and they both said in unison, “Wow!”

Chance, becoming visibly worried, then said to Sagacity, “OK, this is really starting to get creepy. There’s thousands of dollars here. Where did Amanda get all this money? And why is she willing to give it to us to go down to Capo Barbuda? It must really be important because she knew something terrible might happen to her. I think we should just notify the police on the island she went to and let them take care of this.”

“Chance, stop being such a worry wart, we’re supposed to be professional detectives after all. We’ll see what the psychics have to say tonight. They’ll probably come up with some simple explanation. Besides, I’ll see if I can bring my gun. I’ll have to check with the regulations of Capo Barbuda first of course,” Sagacity replied.

“You have a gun!?” Chance blurted out, totally surprised. It had never occurred to him that almost everyone in the rural West had a gun. No one else he knew owned a gun, at least not in the Queens neighborhood he had come from.

“Yes, I have a gun, more than one in fact,” Sagacity replied emphatically. “Almost everyone where I’m from learns to shoot. You have to be able to protect yourself from predators, both the wild and the domestic kind.” She paused and then added self-mockingly, “That’s especially true if you’re a beautiful young woman like myself.” Few would have disagreed with her self assessment however.

Buy Karma Dead Ahead On Amazon