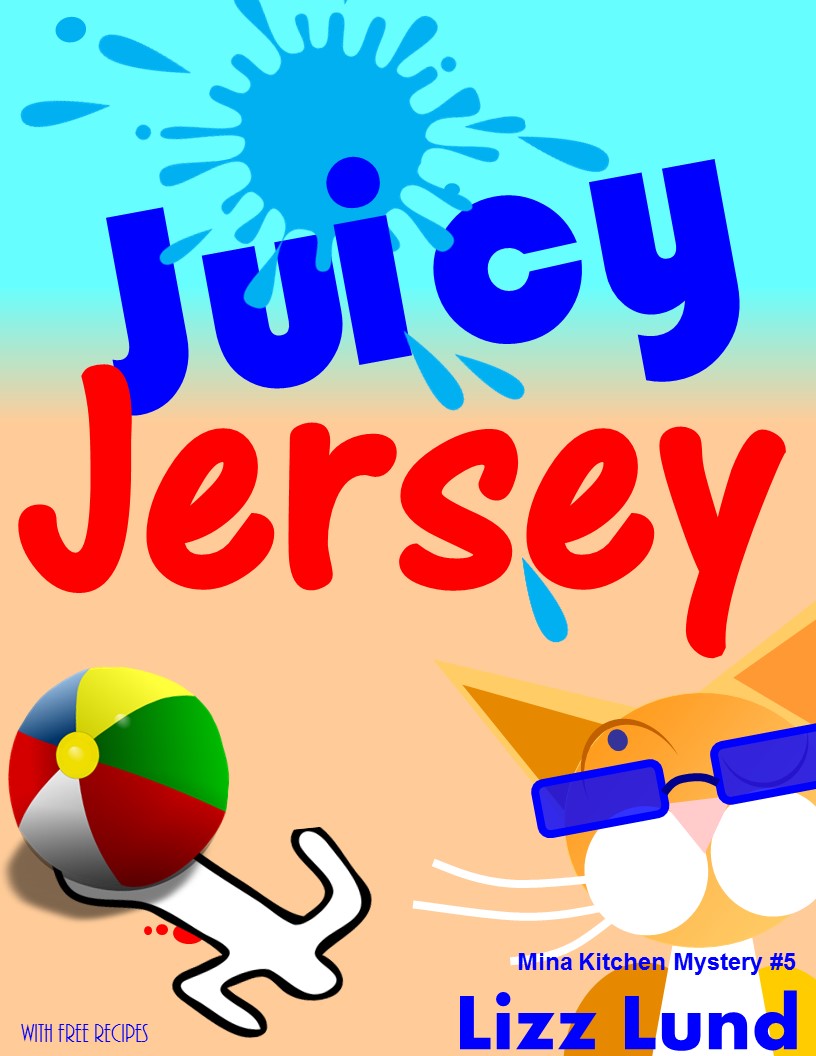 Summertime, and the living is… not as easy as Mina had hoped. But, she finally has a full-time job, working alongside her new boyfriend, Jack (that is, Chef Jacque, when they’re at Squirrel Run Acres.) That’s good, right? Except that poor Mina and Jack have been working together a lot lately–specifically fourteen hour shifts in a sizzling kitchen–for months.

When tempers flare hotter than fat on a fire, Jack steps up and splurges for a romantic get-away to Cape May Point, New Jersey. All is forgiven and soon sunset beaches wink from the distance, until Mina’s stuck with dog sitting duties for Jim, her buddy Bauser’s three-legged dog. Complicating the canine conundrum is Bauser’s last minute plea to deliver Jim to a client location, in Bumville, New Jersey. No biggie, except that Bumville lies in the polar opposite direction from Cape May. And Vito and Miriam also happen to be visiting the client–who is none other than Vito’s niece, Helena Pryzchntchynzski. Oy.

Further jeopardizing their journey through Jersey is Jim’s discovery of Babette Bernstein. Her murder launches a connect-the-dots of corpses that ripples dangerously around Mina and Jack. Oh–and the kidnappings, plural–are a little scary, too.

Will Mina and Jack escape the bad guys? Will they survive their first vacation together? More importantly, will they finally have one?

If you’re in the mood for funny fiction, a cast of chatty pets, and unsolved murders–read on. Juicy Jersey packs a roller coaster ride of murders, mayhem and mojitos. Come root for Mina, boo the bad guys and nibble a nosh, courtesy of the author’s recipes in the back of the book, vetted by Lund’s real-life favorite chef, her husband, Chef Andrew.

What Inspired You to Write Your Book?
Cape May Point, New Jersey… summer shore traffic… heat waves… and Mojitos.

How Did You Come up With Your Characters?
Most of my characters names are based on actual family members. Their personalities… not so much. I wanted to invent a world where everyone is weird in their own way; and tolerant of everyone else's weirdness, too. Except for the murderers. That would be bad.

Once again I gently remind you, dear reader—if you don’t like improbable fairy tales; GO BACK.

If vintage Steve Martin or Chevy Chase isn’t your thing; please return this book and reclaim your hard-earned cash. We all work hard for our daily bread. Besides which, no one likes to be disappointed, no?

That said, if Mel Brooks or I Love Lucy is your thing—you’re golden.

I hope you’ll find this book to be one of your funniest reads ever. The reason being simple—the world has gone mad: politicians are crazy; our planet is a crap shoot; and simple-minded teenagers are sprouting into killers. In short—you need a distraction. So did I. This is it.

Juicy Jersey is the fifth in the series, but fear not if this is your first Mina Kitchen tale; I made sure you’re introduced to the gang. Well, at least some of them, this time around. After all, we’re not in Lancaster anymore. In point of fact, this is the first Mina Kitchen novel that is not set in Lancaster. James Michener, move over. Well, not really. But seriously—I got him and his team beat when it comes to Bumville.

If you haven’t read about Mina’s previous adventures, fear not–and read on. You’ll get to know Mina and her friends, and have some fun. Her other tales are available here: Mina Kitchen — Humorous Cozy Mysteries

The story you are about to read is completely fictitious. All of the characters, groups and events were spun from daydreams and too many cookies. Any similarities to actual people are completely coincidental. Some of the geographic locations referenced are actual places. Others are completely make believe. For the purposes of this story, all persons and groups herein are made up from pixie dust.

The recipes at the conclusion of this book are my own, assisted with critical guidance from my husband, Chef Andrew. If you’re inclined to make them, I hope they will bring a smile to your face as you recall the portions of the story which inspired them.

Now it’s time to put your feet up, sit back and relax–who doesn’t love a day at the beach?