You are here: Home / Fiction / Jackboot Britain by Daniel Fletcher 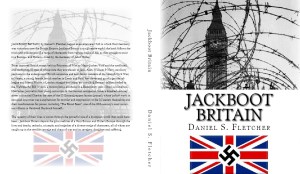 The Alternate History – What if Hitler beat the Brits?

JACKBOOT BRITAIN is a new novel set in an alternate 1940 in which Nazi Germany was victorious over the British Empire. Jackboot Britain is a nightmare world; the book tells a harrowing tale of militarisation, dehumanisation, prejudice, power and war, as it follows the trials and tribulations of a range of characters from various walks of life, as they struggle to exist in a Europe – and occupied UK – ruled by the Germany of Adolf Hitler.

From a platoon of captured British troops held as prisoners of war, to Major Jochen Wolf and the conflicted, and conflicting men of the SS in whose care they are placed; to the band of auxiliary partisans in the underground British resistance, anti-fascist veterans of the Spanish Civil War; to Naomi, a young, female Jewish teacher in Leeds and her clever, quirky male friend; Maisie a London shopgirl and Hans, an unwilling German soldier drafted to the Wehrmacht; Bill Wilson; ageing, monosyllabic alcoholic in a Bloomsbury pub; a humanist-libertarian journalist of renown; four young conscripts to the German Wehrmacht occupation force; Charlie, a disabled cockney street kid; the men of the SS Einsatzgruppen (action groups), whose ‘police’ work in occupied countries was a euphemism for murder and suppression; to the SS leaders themselves and their machinations for power and internecine intrigues, including “The Blond Beast”, one of the 20th century’s most notorious villains in SS and Police General Reinhard ‘The Hangman’ Heydrich himself…

Every aspect of ugliness and suppression associated with the barbarism of Nazi policy – from the genocidal aggression of the Security Police and SD in occupied territories to the devilish work in the shadows of the Gestapo secret police; the dehumanisation of entire races and those otherwise ‘unsuitable’ deemed ‘life unworthy of life’; the institutionalisation of scientific racism, the glorification of war and military conquest and its effects on a generation raised under its influence; the persecutions, the lust for power; the awful internment system of the concentration camps and the savage lethality of German policy in every sphere of life is explored in this wide-ranging alternate history novel; a book that harkens to the hellish years of German atrocities across continental Europe, by showing the terrifying possibilities of what could have been in a Nazi-occupied Britain…

Jackboot Britain depicts the grim realities of a Nazi Britain and Hitler’s Europe through the lives and deaths, triumphs, setbacks and tragedies of this diverse range of characters, all of whom are caught up in the carnage and chaos of war in this story of love and loss, hope and fear, prejudice, cruelty and power.

Each tale runs its course through a nightmare that seems unimaginable to the modern British sensibility, but that at one, disquieting moment in modern history, threatened to engulf the world whole. As each character manoeuvres in the dark shadow of National Socialism and its jackbooted armies, we see each story unfold as they near their own powerful conclusions, each trapped by the malevolent force that brought unparalleled suffering and chaos to the world.

What Inspired You to Write Your Book?
It seemed an interesting idea! 1930s and 40s Europe was one of the most politically and racially charged time periods in human history, and dramatic events occurred on an unparalleled scale. Speculative fiction allows the writer to tinker with ideas about the time period in a more flexible way than does a straight fiction that diligently follows the events of real time.

How Did You Come up With Your Characters?
Some were historical; the fictional characters all represented a different element of society, struggling with the Nazi occupation in their divergent realms and in different ways.

Thereafter, left Spain in January 2012 and moved to Thailand, working as a freelance professional copywriter and journalist in Southeast Asia as well as a martial arts reporter for two years, before becoming a full-time author in 2014.

“Kings of the Jungle” followed “Jackboot Britain” in 2014 – further novels planned include “The Acid Diaries”, “The Mescaline Diaries” and “The Last Lions of Asia”.