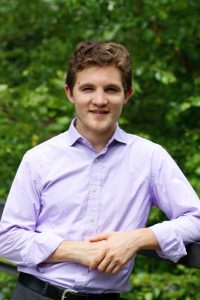 About Zachary Barnes:
A Pennsylvania transplant, Zachary Barnes is a fantasy author who has been self-publishing since 2007. Barnes, an avid reader and artist all his life, first ventured into the world of storytelling by competitively co-writing short stories with his equally-bored sister, Rachael. Only in 2005 did Barnes’ interest in writing become serious when the substantive worlds of Robert Jordan and George R. R. Martin inspired him to create his own version.
Barnes’ next development as a writer came during his senior year of high school, after a sports-related injury ended his wrestling season two months early. Finding an abundance of structured free time that had once been taken up by practice, Barnes was able to focus his energy on fleshing out a story that began as a Scholastic Writing Competition piece but quickly evolved into something much lengthier. Over a feverish six months, this piece became Barnes’ most recently published novel, Winter’s Throne, which debuted just before his 2010 graduation and received high accolades from his school friends and, of course, his mother.
Although Barnes went to college at James Madison University for Music Education, he was eventually called back to writing in the form of a student-taught class on novel writing, which Barnes proposed, developed, and then facilitated with the guidance of his education professors. Both buoyed by the zeal of his writing peers and caught within the social upheaval of an impending graduation and the subsequent move and job search, Barnes found inspiration for Avengarde in his final weeks at JMU.
Over the following three years, Barnes secured a position at the Annandale Campus Reading and Writing Center within the Virginia Community College system. It was through this opportunity that Barnes met his publishers at PandaMonk and began the publication process of Avengarde. This novel marks Barnes’ debut in traditional publishing and will be released November 15, 2016. Currently, Barnes is the assistant manager and lead tutor at the Reading and Writing Center at Northern Virginia Community College.
When he’s not writing or tutoring, you might find Zachary and his girlfriend Lani trying new recipes, searching for the next big sour beer, and dreaming big dreams, in that order.

What inspires you to write?
I’ve always thought of writers as great observers of the goings-on around them; I am inspired by random things, and there is no explanation for them other than they are particularly beautiful or sad. With my writing, I try to invoke a certain time or place or feeling, and if I ever feel uninspired, I try to engage with another story and then give myself some time before I begin writing, to avoid stylistic regurgitation.

Tell us about your writing process.
So much of writing the first draft for me is an exploration of my own thoughts, to the extent that outlining the whole story (as I am often tempted to do) effectively “completes” the arc and murders my inspiration. After all, the sweetness of discovery (I was a reader long before I was a writer) is the most enduring and seductive feeling I have experienced in this trade. In short, too much planning stifles my creative process or leads to stilted, cliche-ridden ideas. I find writing in the moment more fulfilling, more productive, and more meaningful. Ultimately, the editing process, which takes much longer anyways, is where things like an outline and character sheets come into play, but no sooner than that.

For Fiction Writers: Do you listen (or talk to) to your characters?
I always listen to my characters. If they’re silent because they don’t have an answer, I see that as a hint that I don’t know enough about them. Each character acts based on a series of learned impulses that change throughout their arc, and they usually know what’s best for themselves. If I’ve done my creative homework, then I can place my full trust in my characters.

What advice would you give other writers?
First off, remove the “backspace” and “delete” keys from your keyboard before you start the first draft. These keys are evil and must be destroyed. If you are doing anything but generating content on the first go-through, you may be overthinking the process.
Also, criticism is inevitable, so harden yourself. When it comes to other writers, their opinions are just that; you should put their ideas in context with what you want to achieve and go from there. It’s your name on the book.
Lastly, sit down and write. Here’s my method: try 10 minutes. If you’re feeling awful about your progress, then at least you’ve gotten 10 minutes of work done. However, if that 10 minutes actually felt productive (the hardest part is starting), you can keep the momentum going. Consistency is key.

How did you decide how to publish your books?
I have previously self-published, and I figured that I ought to try the traditional method to see what all the fuss was about. Also, I realized early on that more eyes on your work are always better than fewer, and if traditional publishing provides anything, it’s a dump-truck-load of eyes. The publishers I ended up working with are absolutely wonderful people, and it felt good to be working on the project in a group rather than all on my lonesome.

What do you think about the future of book publishing?
Stories are a binding thread of humankind. The way they are consumed, however, is a different matter. Digital publishing is at a place that you would have never expected merely ten years ago, and I truly believe that the industry is headed in that direction. That being said, I greatly enjoy having things in print. To put it in another way, I’m glad I kept my CDs; I streamed one of my favorite songs the other day and found that the version I had in my library had been replaced by a different version. Now, I try not to sound alarmist too often, but the idea that content that once I purchased could be remotely altered is quite disturbing and has far-reaching ramifications (hello Freedom of Speech, I’m looking at you). Otherwise, nothing would keep me from embracing the digital revolution with open arms.