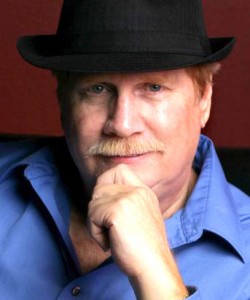 About William D. Nash:
William D. Nash’s fascination with UFOs began in junior high and lasted into the early 1980s, when he investigated a few cases, both independently and for the Mutual UFO Network.

The origins of Invasion USA! go back to 1971, when Nash was in high school. Originally intended to be a short homemade movie script, the story grew and evolved over time but not without setbacks. Nash’s original final draft, loaned to a friend to get his opinion, disappeared—along with his so-called friend.

Nash started a disc jockey business in 1981 and retired in 2013. When he told people he partied for a living, he meant it.

Retirement and a fractured ankle brought Invasion USA! back into Nash’s life—well, that and his wife’s insistence that he do something other than play video games in his retirement years.

What inspires you to write?
I started this book back in the ’70s as a script for a movie short. Over the next ten years it had increased into a trilogy.

After losing the final draft in the early ’80s I set it aside, not wanting to start over. (This was before computers and word processors. Everything was typed on a typewriter and was not easy to edit.)

When I was laid up with a fracture ankle I started looking over my notes and earlier drafts for the books. My wife wanted me to do something besides play video games in my retirement years so I decided to rewrite the books. The first book, Invasion USA!, was completed within 8 weeks using the earlier drafts as a guide.

With today’s technology, the internet, and more good science fiction to inspire me I was able to update the material in the books to make it more believable.

Tell us about your writing process.
When I first started the books it was strictly “by the seat of my pants”. The words just flow out of me onto the paper.

When I started rewriting the books during the summer of 2015 I used the old drafts as a guide while looking up material on the internet. There is a lot of resources online to help writers, both fiction and non-fiction.

I was able to obtain facts that would not have been available when I first started back in ’71 for the book and updated it to match a possible future.

What advice would you give other writers?
Use the internet. It’s very helpful to generate ideas and facts for your writing. I got pictures that help me to describe what I needed off the web. As well as information on current military equipment.

How did you decide how to publish your books?
A friend of my sister told me about self publishing, as well as a friend who started up a business to help authors to self publish.

I personally chose to go with Create Space to publish my book. They work with Amazon as well as Kindle to get the books out there. Their customer service helped me a lot as well, along with a forum with a lot of information.

For new authors I would suggest to research your options. There are several sites for self publishing. Choose the one that seems to fit the marketing plans you may have.

What do you think about the future of book publishing?
POD (Print On Demand) looks like a great way for new authors to get published. It’s basically cheap and you don’t have to buy a hundred copies of your books to sell. Instead, the book is printed when someone orders a copy and you receive your payment within a month or two (depending on which program you work with).

What genres do you write?: Science Fiction, UFOs, Space Travel