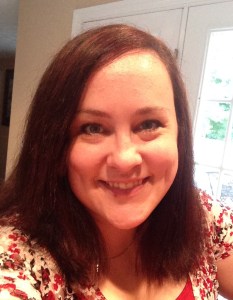 About Vicki Leigh:
Adopted at three-days-old by a construction worker and a stay-at-home mom, Vicki Leigh grew up in a small suburb of Akron, Ohio where she learned to read by the age of four and considered being sent to her room for punishment as an opportunity to dive into another book. By the sixth grade, Vicki penned her first, full-length screenplay. If she couldn’t be a writer, Vicki would be a Hunter (think Dean and Sam Winchester) or a Jedi. Her favorite place on earth is Hogwarts (she refuses to believe it doesn’t exist), and her favorite dreams include solving cases alongside Sherlock Holmes. Her YA debut, Catch Me When I Fall, released October 23, 2014.

What inspires you to write?
Everything! Sometimes it’s a song lyric, or a TV show, or a movie trailer, another book, or even a dream. The plot bunnies are relentless!

Tell us about your writing process.
I’d say I’m somewhere in-between a planner and a panster. I need some sort of backbone before I start so I know where my plot is going, but then I pants my way between each plot point. My favorite outlining tool is Save the Cat, but I’ve also used (and liked) the 7 Point Plot.

I do have a whiteboard that I use for my world-building, and then I have a cork board that I pin character cards to so I never lose track of hair color/eye color/flaws/strengths/etc. Because I’m such a plot-first writer, I have to take extra time in developing my world and especially my characters.

So, I take lots of notes on my world, and then I do long character surveys and mini-biographies on my main character(s) and quick surveys on my other major characters. I need to feel like I KNOW them, as if they were friends, before I start writing, because, otherwise, my characters fall flat.

What advice would you give other writers?
No matter how much you think you’ve learned about writing, there is always something more. And don’t ever give up. If you have the tenacity, eventually good things will come to you, especially if you’re bettering your skills. CPs are the most important people you will have in your career (except for maybe an agent), so make sure you seek out good ones!

How did you decide how to publish your books?
It has always been my dream to walk in any bookstore in the country and see my novels on their shelves. That’s why I chose traditional publishing over self-publishing. For new authors who can’t decide between the two, I would ask yourself: what is most important to me? Do you care about books being in brick and mortar stores? Do you want to be reviewed by companies like Kirkus and School Library Journal? What are your goals? From there, you can figure out which direction you should take.

What do you think about the future of book publishing?
With so many authors self-publishing (some of them really, really good writers) and e-book sales being the majority of authors’ royalties, I think it’s going to be even harder to stand out in the future. Authors, now more than ever, need to be in the business because they love to write, not because they’re looking for a massive paycheck.