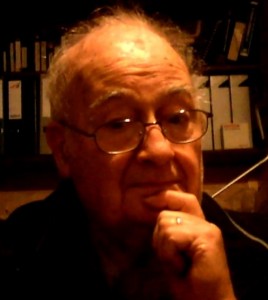 About Tony Thorne MBE:
I am Tony Thorne MBE, a long time SciFi fan, but professionally a Chartered Design Engineer, who built up a research and development company in Kent, England, specializing in very high and low temperature instrumentation. Its worldwide commercial success led to me being awarded an MBE by the Queen.

Now retired, and in good health, I write speculative science and fantasy fiction and have self-published thirteen collections of short stories, including the awards winning TENERIFE TALL TALES trilogy, and MACABRE TALES. Also ROBOTS INCLUDED, TALL SF TALES FOR TEENAGERS, THREE KINDS OF CULTURE SHOCK, BILL’s HELICAL BLUES, TIME TRAVEL TROUBLE and my best selling, THE SINGULARITY IS COMING, all available, as eBooks and paperbacks from AMAZON, etc. The latter title has just been acquired by the Chinese Government IT Publications Division, and will be published by them, in simplified Chinese, early next year. My first, near future, SciFI novel, POINTS OF VIEW was published in 2012, by (EP), Eternal Press, Santa Rosa, CA, and I have completed two sequels, the first, PoV2- The Weapons, will be published by the EP new owners, Caliburn Press shortly. My website is: www.tonythornembe.com

What inspires you to write?
Something I read, a news headline, science news, give me an idea. I think about what may happen next and begin to speculate…

Tell us about your writing process.
I’m definitely not an outliner. With an idea in mind I settle down with my laptop and write the first paragraph. Then I take it from there and see where it leads me. Characters evolve and fit in where relevant. When I’m about three quarters way through, I begin to think about the ending and what sort of twist I can give it.

When this first draft is completed, I put it away for a while before returning to it for an edit. Sometimes that will finish it, other times I may want another edit…. later.

When ready to publish, if a short tale, I’ll send it off to a suitable outlet. If they don’t take it, I give it another edit, until someone does take it.

For Fiction Writers: Do you listen (or talk to) to your characters?
Yes, often, especially at night. I dream about the story and sometimes even meet the characters. Occasionally, what happens gets built into the story next day.

What advice would you give other writers?
Keep at it and never give up..! It may take a long time to get anywhere, even if you are a genius. There’s so much competition nowadays… everyone is at it. The trick is to build up a fan base and get people to read your output and review it.

How did you decide how to publish your books?
After a painful fruitless, time trying to find and agent, as well as contacting publishers directly, I decide to self-publish a couple of short story connections… to see what happened. Nothing did for some time. Nobody knew I was there, except friends and relatives when I told them. Naturally, they were overwhelmed, but expected me to give them free copies, now that I was an author.

From square one I realized I had to start promoting my publications. It took a lot of time, and cut into my writing time… but after a few years I can claim to have become known… even if you have never heard of me.

What do you think about the future of book publishing?
eBooks are very popular, here to stay and expanding. I believe Paperbacks will always be with us, because when travelling, especially before a long flight browsing in the airport bookstore, they will always be an impulse buy, hard to resist.

Hard copies…I’m not so sure about, but they always look good on a shelf.

What genres do you write?: SciFi, Near future speculative tales, Fantasy, Macabre, Droll, Humor, and some Non-fiction.