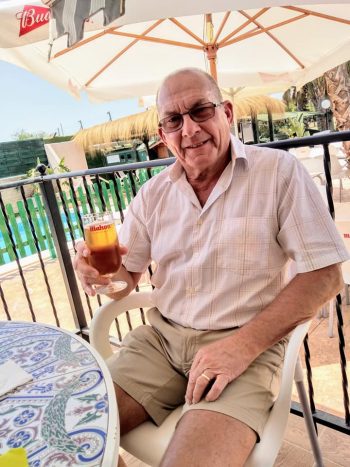 About Tony Levy:
I was born 14 August 1951 in Tottenham, London, England. I am happily married to my best friend and soul mate, we have had and continue to have great times together and we have been married for nearly 30 years.
I spent most of my formative life in and around Tottenham and London. I love football and always wanted to be a professional footballer (soccer) but was not good enough. I have always loved cats and presently my wife and I have two cats that we rescued from some terrible storms two years ago. We help out with the local CNR group to capture street cats and get them neutered then return them to the wild.

What inspires you to write?
Linda LaPlante or more especially a TV drama she wrote depicting a prison and the staff within it. I was so infuriated at how it showed prison staff that I turned the drama off but was still seething about it when I went to work the next day. So much so that an assistant of mine said that I should write a book and show my side of the reality of prison life. The seed was sewn.
I have always loved books and reading particularly historical non-fiction but have always loved reading about people and autobiographies.
I suppose I started really writing when I won a writing competition in my local newspaper. I had to write about my favourite football player from our local football team Tottenham Hotspur. I won the competition and my prize was a tour of the stadium and to meet all the players and staff this was back in 1967. I never really wrote much after that but in 1990 I entered a competition in a running magazine and again one the prize which was an entry into the London Marathon, which I completed in the time of 3hrs 42 mins not bad for a 40 year old.
But it was when I turned 60 that I started to write my first book and have now written three more since then.

What authors do you read when you aren’t writing?
My favourite author is Sir Winston Churchill and his amazing book ‘The History of the English speaking people’. An incredible look at the English and England from the perspective of one of the 20th centuries great political leaders.
I love fiction too and read each Lee Childs books with relish whenever he releases a new Jack Reacher Story oh if only I could write fiction?
John Le Carre and his spy series are amongst my favourites along with Leon Uris, Len Deighton.
I am also fascinated with anything to do with the Battle of Britain and the stories of the fighter pilots of that period, the famous few. But any historical books on our world history is a particular interest for me.
I don’t have a favourite genre but like memoirs and humorous anecdotal books hence the way I try and write my books. Non-fiction spy stories and thrillers but am not really into horror

Tell us about your writing process.
As stated above I thought how on earth can a prison officer sit down and write an autobiography of his working life?
I just wrote whatever came into my head in whatever order they came in and then developed each chapter from my original thoughts. Once a chapter was written I then started to put them into some sort of chronological order. I realised that it was a help to make chapter headings from my random memories and developing the chapters from the headings. It was amazing the more I wrote the more the memories came flooding back. This is how I now write all my books. I suppose when writing memoirs its easier to write this way than if writing fiction where you have to develop plot, characters and storyline in an order

For Fiction Writers: Do you listen (or talk to) to your characters?
I have not written any fiction yet but am developing a fictitious storyline based on the kittens that appeared on our doorstep some years ago lost and hungry after some bad storms

What advice would you give other writers?
Do it and do it your way and remember everyone is a critic but also JK Rowling was the first author to make 1 million from her book sales yet was turned down by 12 publishers I wonder how they feel now!

How did you decide how to publish your books?
My first book was with a traditional publisher but I suppose I was ambitious and didn't really understand the industry not realising that who wants to buy a book by a completely unknown person who was doing a boring job in a prison. They were not interested in my second book but a new publisher took it onboard. But for my third book I thought I would try self publishing to see what the differences were and of course no publishers were interested in publishing my book so I had no real option but to self publish.
I would always try a publisher first after all they are the professionals and know what to do to make your book read well and be presentable along with editing, but if you cannot get a traditional publisher interested then why not try self publishing but keep away from vanity publishers who want money from you upfront.
From the start my aim was to actually get my book published irrespective of if it made any money, just to have somebody else read your book and like it is the reward for me and of course I have left a little bit of me for my future generation to know about their family.

What genres do you write?: Non-Fiction Biography Memoirs