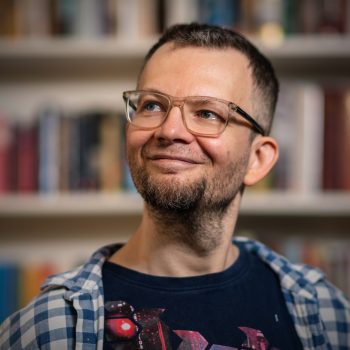 About Thomas Kast:
I’m an award-winning independent photojournalist and illustrator living in Zurich, Switzerland, and have published several photography art books. I’ve spent a big part of his life in Israel, where I taught photography and illustration at the Shenkar College of Engineering and Design and other Israeli colleges.
My debut novel, The Great Convergence, is an absurdist-philosophical science fiction piece. It evokes many of my real-life experiences fused with unhinged fantasies. I hope the reader can have some fun telling one from the other.
Currently, I’m working on the humorous and philosophical comic book series Bablah’s Odyssey, which is scheduled for release in July 2022. Bablah’s Odyssey features a mad scientist, lord Bablah as he traverses the universe, mansplaining the ‘wonders of progress and civilisation’ to his unassertive yet perceptive mutant sidekick, the Pet-Thing.

What inspires you to write?
The conversations I have with people I know, with those whom I don’t know, and with myself in the shower. Sunsets happening too early, and sunsets happening too late. Forgotten breakfasts and overdue dinners. A sudden pang of remorse. Blast from the past. The smell of rhododendrons I walk by in the park. Voices in my head. Voices outside of my head. Sounds both sudden and uninterrupted. Surprises and lack thereof. Things I see and those I pretend not to notice. Simply put: everything and anything.

Tell us about your writing process.
I keep hundreds of notes, ideas and observations I constantly keep jotting down. I often reshuffle all my jottings until a more or less coherent plot emerges. As for software, I use Aeon Timeline to keep track of what’s going on. I used Scrivener in the past for content creation, then migrated to Ulysses. Both are fantastic apps, very intuitive, great for organisation and, unlike MS Office, both were created especially with writers in mind.

For Fiction Writers: Do you listen (or talk to) to your characters?
I neither listen nor talk to my characters. I make things happen to them and watch the events unfold in real-time. Sometimes, my characters act predictably, but not always. Sometimes things get out of hand, so I need to intervene and adjust a couple of settings governing their universe until I’m pleased with the result. That said, I don’t mind things descending into complete chaos now and then 😉

What advice would you give other writers?
Follow your instincts. And don’t sweat it. It’s highly probable no one will ever discover you or read your books, so you might as well enjoy the process. You never know.

How did you decide how to publish your books?
Someone asked me once: ’Is there a market for what you write?’ To which, I replied: ‘I hope there isn’t’. I believe the writer should create demand instead of trying to fit into an existing trend. This is what all successful writers say you should do. The unsuccessful ones will advise you to ‘write for the market’. In my opinion, there’s a strong need for original content.
Having assumed my writing would be too much to stomach for the agent/publishers-driven industry, I self-published, got my tea-box out, and now I yell about what I do at all willing to listen.

What do you think about the future of book publishing?
The big publishing houses will keep cranking up large volumes of repetitive nonsense for the masses, which, ironically, the masses will despise for being repetitive nonsense. Facing oblivion, indie writers will pander to the market and keep cranking up similarly repetitive nonsense, only of poorer quality than the ‘literature’ produced en-masse by the big five.
The big five will become the big three, then the big two, and finally, they’ll roll into the big one known only as the Publisher. The writers who have something to say will either starve or move onto filling spreadsheets for twelve hours a day, forced to take mind-focusing dugs without which it won’t be possible to keep the deadlines.
By the end of the century, all the writers and journalists will be replaced by the A.I. Soon after, people will stop reading altogether, favouring memes and ever-shorter videos instead. Finally, by 2300 the ability to read and write will be entirely forgotten.
Fast-forward about a hundred years. The Publisher, entertainment industry, the media and all remaining social platforms will merge into the Media Ltd. Human brains will be replaced by silicon chips upon birth, and, eventually, all humanity will be known as the Hive. Having produced too much information to process, the Hive will disintegrate by the early 3000’s.