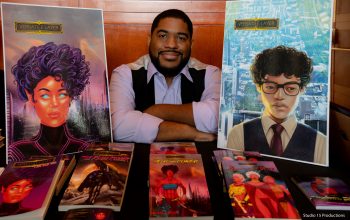 About thomas davis:
Hey, I’m Thomas k Davis the author of the Versatile Layer Book series. It’s a 9-part Epic Space Opera. There are 8 books released thus far with the final book in the editing phase. The best way to describe Versatile Layer would be Romeo & Juliet meets Star Wars. Our two main characters meet completely by chance and fall for each other. They’re separated again by a tragedy that leads to a war between their two peoples. Their quests to reunite gets wild. There’s Exo-suits, Elite soldiers, Robots, Alien Amazonian warriors, jet packs, assassins, a war raging in the stars, gangsters, heck there’s even a cowboy. The setting and battles are epic but the heart of the story is personal and character driven.

What inspires you to write?
I'm inspired mostly by film and television. From Farscape to Star Trek, I've been absorbing Sci-Fi/Fantasy for my entire life. I decided that it was time for the world to read my take on it.

Tell us about your writing process.
I start each book by writing the opening and closing chapters first. I then jump around to random chapters in between. I write whatever part of the story inspires me at the moment. My method is super nonlinear. The plot exists to test the characters and their relationships.

For Fiction Writers: Do you listen (or talk to) to your characters?
I don't talk to my characters. But often, their interactions with each other will play out in my head. I'll listen in and jot down the conversation.

What advice would you give other writers?
Every once in a while, let a character do a thing that doesn't effect the overall story. In life people express themselves in ways that don't matter at times. In ways that only matter to them. If you know your character, then when they're random, you'll know why they did that random thing. The audience will accept it because you as the writer put it in with confidence and purpose.

How did you decide how to publish your books?
I decided to self publish because I wanted to get my voice out there. It could, and most often, takes years to go the traditional route. Being new to writing makes the process even more daunting.

What do you think about the future of book publishing?
I think we're going to read more work conjured from the imaginations of marginalized peoples. New perspectives on genres that we're all too familiar with.

What genres do you write?: Space Opera