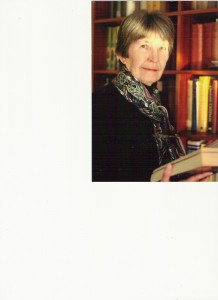 About Sylvie Nickels:
I was born in Neuchatel, Switzerland. My mother was Swiss, my father English and they met on a ship going to New Zealand. This may have contributed to that part of my genes which made me a travel writer. My school days were through World War Two in the suburbs of London. During that time, at the age of ten, I filled school exercise books with stories of a friendly dragon who took two human children on adventures. First they had to manoeuvre their way through barrage balloons, rising shells, descending bombs. At least that part of the stories was real.

I was really dedicated to writing and not interested in marriage; but in the end I did marry at the age of 45 to George Spenceley, a lecturer, photograph, climber and explorer, who actually has a glacier named after him on the Antarctic island of South Georgia. In spite of a late marriage, we still managed 37 wonderful years together before he died in February 2013. I don’t think I shall stop missing.

I became a travel writer, created short stories and eventually novels. Perhaps because of my childhood one of my favourite themes was ‘what war does to people’ – i.e. the effect of war on the children and grandchildren of participants. I wrote four novels on this theme, and then my first Young Adult book, dealing with addiction. There were also two anthologies of short stories. The latest of these came out in December 2014, then as an Ebook in January 2015 and an audio book in July 2015.
My second anthology is called “It’ll be Better Tomorrow” – this was George’s title for it was what he said whenever I expressed concern about our future. He had many disabilities by then, including dementia. This anthology is dedicated to ageing. After George’s death I spent some time in a care home and discovered what an interesting lot we are. The following is the back cover blurb which gives an idea of the characters: “Teenager Buzz was blown away when he found how his Granny Em had put his lessons on computing to very unusual use (Grannies dot com). Harry Briggs was another one who managed to turn the tables with a little help from his grandson and modern technology (Wake Up Call). In contrast, Elli (The Class of ‘65) and Phillida (The Don’t Care Generation) had both left an impression on the Third World; Alice learned at last to stand up for herself (The Wrong Track), Robert Sinclair kept his exploits to himself (Reluctant Hero), and Astra finally solved the mystery of her father’s World War Two trauma (Just Nineteen Days). But maybe the last word remains with Ben whose mantra provided the title for this book. When pushed about his uncertain future, he unfailingly said “It’ll be Better Tomorrow.”

These are some of the stories of Manorfields’ residents, their relatives and their carers. There is humour, poignancy, even romance, but above all they demonstrate that life is very often stranger than fiction.”

What inspires you to write?
Quite often ordinary people doing extraordinary things, which is why I have been attracted to the war theme mentioned earlier. Coming to terms with and overcoming addiction is another. The ageing process, of which I have much experience, is my present interest, as I increasingly discover what an interesting lot we are.

Tell us about your writing process.
Quite often a new novel starts with a light bulb moment based on my own or someone else’s experience which triggers a string of events/characters. These should then be considered very carefully to establish the order in which events best occur to lead to the final chapter. There is a temptation (I am guilt of falling for it) to cut corners, but I know it does not pay off, for either your narration suffers or you end up with a different books.

For Fiction Writers: Do you listen (or talk to) to your characters?
My characters are very voluble and have to be controlled or they could well take over the conversation, or interrupt each other (and who wants a row going on in their head?) Interaction can be very helpful in adding depth to characters, but the author must keep overall control.

What advice would you give other writers?
Write every day unless you have a REAL reason for not doing so. If you have a block, reading back over something you have written can help you unblock it, or at least bring some error to your notice. All else failing, I do some research. You can never do too much.

How did you decide how to publish your books?
In earlier years I had several travel books published by traditional publishers. Returning to my first love, fiction, it was more difficult as I am not a celeb or prepared to write smut, and many companies had gobbled each other up. So in 2005 I turned to self-publishing. I do not make a fortune but enough to cover my costs and publish the next book.

What do you think about the future of book publishing?
Wouldn’t like to know. I still prefer the printed book – I like the feel of it, and a house without books looks unfurnished. But I can see the usefulness of Ebooks for travellers and those with poor eyesight; likewise, audio books.