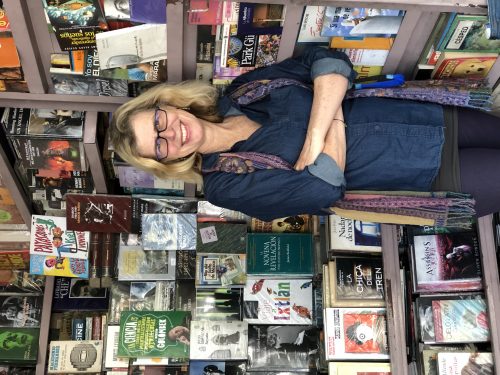 About Susan Welch:
SUSAN WELCH grew up in Minnesota and Wisconsin with either her nose in a book or her toes in the water. She earned a Masters in International Management and built an international career in the brewing industry, and now works for a company focused on regional agriculture, new technologies, and craft brewing. When not traveling for work or pleasure, she spends her time either on the family houseboat in Seattle or in a cabin in the woods of Lummi Island, preferably with her husband, Bruce.

What inspires you to write?
I love hearing personal stories and anecdotes from people I encounter every day. My day job is in sales and marketing, I’ve spent my career traveling the world and the country: whether on planes, at conferences, at client dinners, sitting alone on a park-bench, at Thanksgiving Dinner with my family-I really enjoy collecting real life characters, scenes and scenarios – the type that make me say “…that’s crazy. You couldn’t make that up!” They make me wonder and reflect upon the human condition. Those real life stories, even little anecdotes, make me want to write. They move me to deconstruct and re-construct an imaginary world in which I can dive deep into the journey, the emotions and the growth of my characters, who are often versions of people I’ve met along the way.

Second, of course, as an avid reader, the worlds created by my favorite authors inspire me. My top ten list is a chaotic mix of historical and more modern writers – both men and women, fiction and non-fiction. Secretly, I have always appreciated and aspired to emulate beautiful sentences…the ones that hook you early, and carry you breathlessly from the first word of the first phrase to the last word of the last phrase, sweeping you into a current to a deeper understanding of the author’s intent, without the sentence itself getting in the way.

Tell us about your writing process.
I start with a theme and a big picture summary – sort of like a pitch or a short synopsis. The final story may bear little resemblance to this first step, but by the end, I can usually identify the thematic kernel that got me going-the essence of the story. For A Thread So Fine, it was exploring the struggle of two sisters to hold on to a loved one, despite trauma and estrangement. After taking a stab at a few chapters to get a feel for the characters and the setting, I then go through two exercises:
1) sketching my primary characters and any others I think may be a part of the story. I love writing these – it’s like creating the people you feel like you already know, somehow. They come to life like, I suppose, the work of clay sculptors, revealing themselves to you as you work to see them clearly.
2) writing a full outline. I like to do it in the three act format as described by Donald Maas. Once I get the plot points and the arc organized, I use sticky notes to write out scene or chapter headings, such as ‘In which Shannon discovers she may die, and Nell confronts her maternal failings.’ Properly writing and organizing these statements should result in an outline of the story. Next it’s a matter of writing those scenes, putting them into proper chapters. Of course, it all goes back to the chopping block several times before the final version. You have to be willing to kill your favorite bits- scenes, sentences, images, even characters. As I learned in A Thread So Fine, you have to be willing to reorganize scenes and chapters and even point-of-view choices in order to best tell the story to you readers. The way you first tell the story to yourself may be important, but it’s just the beginning.

What advice would you give other writers?
I’ve noticed that all of my advice (which I give to myself often) comes in oppositional parings.

1. Reading:
In order to write well you have to read.
Don’t read while you write!
You do have to read in order to be a good writer. I believe that. Reading favorite authors, finding new favorites, and being part of writing groups in which you have opportunity to read peers’ writing are all part of the craft. But for me, reading while I am deep in the first draft is almost impossible. I finally forgave myself for this. It’s fine. If reading while you’re in the middle of writing makes you crazy…don’t do it! Plenty of time to read later.

2. Critiques:
Listen to your critics.
Don’t listen to your critics!
When you are ready, find a writing group to share your work and get feedback. Brace yourself, because being critiqued is really hard. The best coping skills to productively receive critiquing that I’ve developed are the following:
Until your work is very, very polished, you might want to limit your beta readers to other writers. Lean on your writing group, and don’t stay in a writing group where you don’t feel very safe and respected about your work.
When your work is being reviewed, listen as best you can without getting defensive. Turn your defensive impulses into questions to ask your critique, giving him/her background they may have missed.
Take notes, or ask the person to make notes as they share.
After your session, walk away from it entirely for at least a day (or in a workshop, at least a few moments – do something else).
When you re-visit the critiqued writing, try to re-write the problem area ‘just for kicks’ in a way that addresses the concern. Give it a few tries. After you have one or two versions, see if the concern makes sense.

BUT…. Don’t listen to folks who question your ability to be a writer, your talent, or your story. Don’t listen to people who imply your writing isn’t ‘good enough’ because you’ve asked them to read an early version. Well intended people who don’t view writing as a craft can (probably unwittingly) say hurtful things. Don’t let that shut down your creativity! Best to make sure you only share drafts if you are really ready to hear criticism and judgment – and to somehow parse the legitimate from the hurtful. And if something you hear even from a well-meaning reviewer doesn’t ring true, put it on a shelf for a while too. When you revisit it later, you might have insight into why it came up – and you might also realize that your own inner voice was right all along.

3. Knowing when it’s done:
And for my own next project, my advice to myself would be this:
It’s not done yet!
Put the pen DOWN, it’s done!
Writing a novel has many phases. Each one has a beginning and an end that is largely up to the writer. And a writer can get stuck in so many places along the way. When I am stuck, I try to leap frog to another part of the project – a new chapter, a re-write of an old one – character sketches. I wish I’d been honest and ‘self-forgiving’ about being stuck. I could have moved on more quickly if I had. I hope I can learn to give myself permission to skip around a little more, to recognize that something might be done for now – even though it’ll still need work at some point. Alongside that hope, I hope I also learn to push myself (gently) to recognize that I might be able to do better. In the process of A Thread So Fine, I recognized the value of good developmental editors. If you find a good one – trust her or him – even if it means unpacking and repacking the work you’ve already done! I learned to give myself a moment (or a week!)…and then to jump back in!

How did you decide how to publish your books?
After querying about 20 agents, hearing back from less than half of them, and reading dozens of blogs by industry experts – I decided to self-publish. I am a sales & marketing person by profession, and felt I could figure it out. I’d read plenty about the traditional publishing path, and the many obstacles even after landing an agent – the many-month timeline from agency agreement to publishing, the risks of being cancelled, or never finding a publisher in the first place. I felt strongly enough about my story and my writing to believe I could find and build an audience on my own. Of course, I realized this strategy could also take a long time, required more upfront investment (time and money) and perhaps result in less overall sales – but for me, it made sense.
I am in this moment of exploring and pursuing a career as a writer now. I have a manuscript that I believe has an audience now. As a middle aged woman with a great deal of experience, an interesting life-story, a can-do attitude and the health and capacity to be ‘out there’ as a voice now – I wanted to seize the day. More importantly, I wanted to maintain control over my novel and its potential for success.

I made a costly mistake right out of the gate. It almost ended my debut project. I chose to work with a hybrid publisher who was well-intended, but inexperienced, not familiar with the US market, and who didn’t share the same vision as I did for my work. It took a first edition of the book and several thousand dollars to recognize my error. Within a month of its launch, I decided to pull back the publication and start over. It was expensive, confused the market for a bit (because that edition had a different, very unappealing cover, uninteresting to my potential audience) and made me insecure about how to proceed. I attended a workshop on self-publishing and marketing in Seattle, and found my way forward. I had the good fortune to find a talented, local book designer who helped me every step of the way. She recommended a stellar publicist – and between the three of us, I am well on my way!

What do you think about the future of book publishing?
Regardless of genre, writers today have to be aware (and beware!) of the market, and the industry. I come from the world of craft brewing, which has also experienced a boom over the last 20 years. Like that world, the publishing world has created an explosion of experts, services, tools and learning platforms. With internet technology, graphics technology and social media, the opportunities to ‘do-it-yourself’ seem endless. And endlessly confusing. And endlessly expensive as it all adds up — from professional editing to book design to publicizing. The pathways of self-publishing seem full of trees bearing false fruit and costly pitfalls. While in some ways, the opportunities to directly market and sell to your audience seem more attainable than ever, it also seems easier than ever to become overwhelmed. The redeeming side of it all is that people are still interested in stories, in learning, in sharing – and technology, for all its downsides, provides new, exciting ways for more of us to participate as writers, readers or providers. I think that the continuing ‘democratization’ of literature –and the industry around it–makes its future bright.

What genres do you write?: I write in historical fiction, women’s literature, literary fiction and essay.