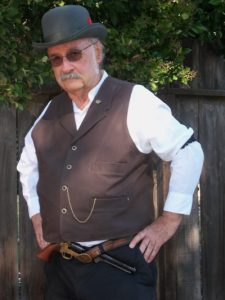 About Steve Bartholomew:
The author was born a long time ago. He spent three years in the US Army where he learned a lot of vital skills, such as how to use a soldering iron and screwdriver, as well as how to make the bed, mop the floor, and wash dishes. Oh, and how to handle high explosives. He grew up and spent most of his life in San Francisco. After obtaining a useless liberal arts degree, he became a social worker and did more than 20 years in the mean streets of New York City, San Francisco, and rural California. He is now devoted to writing books, which he should have been doing in the first place. He has written some science fiction and fantasy, but is now mainly interested in tales of the Old West. In this case, The Old West means mainly California, Nevada, and especially Old San Francisco.

What inspires you to write?
I just like to tell stories. Stories are how we understand the world around us. People have been telling stories since we discovered fire and found an excuse to stay up late at night. I do most of my reading after dark. As a child I used to read in bed with a flashlight, Of course I ruined my eyes and never got enough sleep and did badly in school, but I got to read some great stories. I guess that’s why I do most of my writing after dark. Not with a flashlight though.

Tell us about your writing process.
I never make outlines. I would find it extremely boring to know how a story is going to turn out before I start writing it. I usually start with a time and place. People began reading novels because they wanted to learn what it must be like to live in a different world. I look for the sort of person who might have lived in that world. Then I try to find out more about him or her. The character tells me the story and I write it down.

For Fiction Writers: Do you listen (or talk to) to your characters?
I mainly listen to them. I treat my characters much the same way I treat real people. Listening does me more good than talking. Would a certain man react this way to someone stepping on his toe? Just because I might say or do that, it doesn’t mean he would.

How did you decide how to publish your books?
I am a hybrid. That is, some of my books are self pubbed and others are from trad publishers. My first book was self pubbed. I had no idea what I was doing, but it’s still in print and I have got a lot of positive comments about it. I have several different traditional publishers: some do better on sales than others. I have to say the main advantage of going with a publisher is the editing service. Again, some are better than others. Even if you’re picked up by a publisher you will still have to do a lot of promo on your own. Even Stephen King goes to book signings. If you do publish as an indie be sure you find a good editor (NOT a friend of yours!) and be prepared to pay well for the service. And be prepared to do promo.

What do you think about the future of book publishing?
There are still a lot of us out here who prefer reading books to TV or movies. Not that we avoid those completely, it’s just that books are more fulfilling, like a good hamburger that fills me up better than diet soda. I haven’t a clue about the future of publishing. Fifty years ago, who foresaw the e book reader, or the rise of Amazon? I do believe that as long as people want to hear stories and to tell their own, there will be books in one form or another. Maybe they will be printed on my fingernails???

What genres do you write?: In the past I have written some science fiction and fantasy, but these days I am devoted to historical fiction. In particular I mean the history of California and the old west.