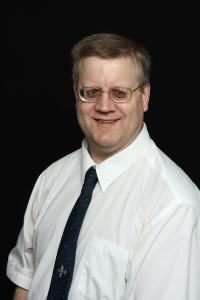 He began writing as a child; his first short story concerned a true incident about his reactions to discipline. During high school, he wrote for the school newspaper and was a
photographer for the yearbook. For a Mass Media class, he wrote and edited a video project.

In college, he began a personal journal for a writing class; said journal is ongoing. He was also a reporter for the college newspaper.

During his early twenties, while working for a Kewanee, Illinois radio station, he wrote a fantasy based story and a trilogy for a comic book.

He has written numerous short stories both horror and mystery.

What inspires you to write?
I’m a voracious reader and years ago I figured i could produce quality material that someone would enjoy reading. I look at major events in life and smaller, personal anecdote shared between friends and I think, “That would work in a story.”

Tell us about your writing process.
Usually an idea hits me and I think about it for awhile. Then I put it aside and let it sit. If it continues to bug me, then I’ll write a few notes on possible scenes, characters, etc. If I want to pursue it, I’ll start on an outline. Once the ‘real’ writing begins, I’ll grab a legal pad or notebook and start in longhand. Then I’ll put it into a document on the computer. I may read pieces of it to a critique group for ideas on how to improve. I’ll print the manuscript and wade through it correcting and taking notes and rewriting or deleting portions. Another couple times through the story and I’m ready to start submitting.

What advice would you give other writers?
Don’t quit your day job…unless writing is your job, then congratulations, you’re living the dream.

I think one piece of advice that separates the writers from the wannabes is: Don’t talk about writing – write. Don’t dream of grand stories and plan to write them some day. Plan and outline those stories, then pick up a pen and write. Otherwise, you’re fooling only yourself.

How did you decide how to publish your books?
I searched for agents/publishers who would accept them. I haven’t taken the leap to self publishing. It’s a struggle to find someone who’s interested. For me it came down to meeting someone, befriending them, then asking if her company would be interested.

What do you think about the future of book publishing?
A continuation of the current situation. With Amazon’s world of self publishing accepting anything from good stuff to total crap, it’s buyer beware. You have a number of small/medium publishing houses that may be one step up from self publishing, which doesn’t help the author too much. Of course, the major presses will be around because they’ve figured out how to make money with their established big authors. But authors have to realize, it’s a business. Writing is a business. It can be a ‘hobby’ but to really succeed, it’s a business and writers are selling a product.

What genres do you write?: Mystery. Horror.