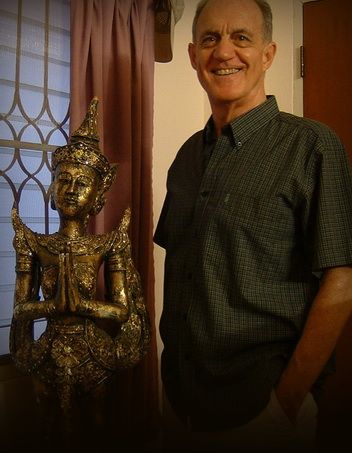 About Stephen J Carter:
I’m a Canadian living in Chiang Mai, Thailand. Something about this northern city makes it a perfect place to write. I set my horror novels in Thailand probably because Thais have such a rich supernatural tradition. I’ll likely continue writing and publishing ebooks here until they physically drag me away. As for my work load, ironically I’m far busier now with the daily writing, revising, editing, and promoting than I was in the academic world years ago. Frankly, I wouldn’t have it any other way!

What inspires you to write?
When I sit down with a book the curtain goes up in my mind and the story world rolls in. Could anything be more magical? I write to recapture that moment. Doing it well makes me feel literally more alive. What else inspires me – nature, books, faces, voices, tastes, history … almost anything. I also find I feel a grey pall and gloom settle over everything when I don’t write.

Tell us about your writing process.
I planned and outlined my first novel exhaustively, drawing up a stairway of steps (scenes) on a 5-foot long scroll of old-style printer paper. At first I did that to convince myself the project was do-able, but then I started to enjoy the process of seeing the story events in one majestic arc. It didn’t matter to me that I changed quite a lot of that plan, it felt great to see a blueprint for my story. I’ve done a truncated version of this on more recent projects. I write up a list of each Act’s goal, the climactic problem, the hero’s decision, and the outcome of that (turning point). With this I can see the story’s arc of events. And that’s enough.

I write every day. I do this long-hand and then type up the accumulated pages about a week later, revising as I type. After I finish this first and second draft, I print it out and proofread, doing a third revision. Then I do a fourth and final revision, and format it for upload as a mobi file for the kindle.

For Fiction Writers: Do you listen (or talk to) to your characters?
I talk to my characters, encourage them, commiserate, but it’s more a monologue than a dialog. I spend much more time visualizing and working on scene flow. So character voice has been an area of weakness for me. Characters might ring true if the story comes to me in a series of pulses where I simply put it down on paper after seeing multiple versions of scenes as though it’s a movie. But that rarely happens.

Usually it’s as tough a slog imagining the action as getting it down, and then the characters are often lacking in motivation and underlying principles. In the future I intend to write Act 1 in a story several times, each time from a different character’s point of view. After that I think each of them would be clearer for me: what they most want, fear, regret, hate, and secretly aspire to.

What advice would you give other writers?
In terms of creating a story, imagine yourself as someone else telling the story. Give it a definite narrator to be the half-way point between you and the characters. Alternatively, make the hero into the narrator, telling his own story. The trick is to find a way to sink right away into the magic of this different world every day as you write.

For promotion and marketing, try to re-frame it in a way so it becomes an adventure for you. This will take about 30-40% of your time and energy, so making it fun is important. Just as a writer draws a reader into his/her story world when they read your book, we also have to learn a way to draw them to the vestibule of that world, and invite them in. You’ll either slowly build a recognizable ‘brand’ for your catalog of books, or you’ll build a relationship between yourself and readers.

How did you decide how to publish your books?
I had one finished book that I’d wanted to publish, and the eBook route seemed worth a shot. But of course I had no idea of what I was doing initially. I assumed there would be a vetting and editing process, that my submitted MSWord file (to an ePub platform) would be read and approved by a person, not a formatting bot. But of course the site software just converted my file, added the cover I’d included, and it went live a short time later. Maybe if I’d known what the odds were against success, and how literally nobody would read it for 2 years, I might have had second thoughts.

After a year I posted my three titles (by then) at two additional ePub retail platforms. But there was no change. Six months later I cancelled all that, learned Kindle formatting, and submitted to Amazon. I immediately had a handful of downloads each month, which continued moderately increasing. I recently found a way to invite readers one-on-one to post a review on my books (via Twitter followers). That’s resulted in a bump in reviews and downloads for each title. And that’s where I stand now. Promotion is clearly a work-in-progress.

What do you think about the future of book publishing?
I believe ebooks are still basically a print book on a screen, so despite several years of exponential growth their potential has yet to be realized. By analogy, Google maps weren’t popular at first. They became popular not because they mimicked static maps (as ebooks mimic print), but instead offered apps and features not available on static maps. I have no idea what such future dynamic features in ebooks might be, but once that happens the next wave of exponential ebook growth will begin.

What genres do you write?: SF, Horror, Writing Skills, and Metaphysical