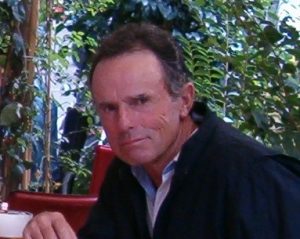 About Stephen Douglass:
Born, raised and educated in Canada, Stephen spent the first half of his career working for the two largest oil companies in the world: Exxon and Royal Dutch Shell. He spent the second half working for one of the smallest oil companies in the world; his own. He has three sons and one daughter, all of whom are grown and “off the payroll”. Now retired, he spends his summers with his wife, Ann, and their two cats, Abby and Samantha, at their Canadian home near Niagara Falls. They winter at their Florida home in Port St. Lucie. When he is not writing, he is reading, traveling, or playing horrifying golf. He plans to write until the day he dies, probably longer.

What inspires you to write?
For me, writing was an accident. When my friends in Muskoka, Canada and Florida became aware of the story of my incredible life in the Canadian oil business, they encouraged me to commit it to writing. They insisted it was a story that must be told. Reluctantly, I did, and after more than twenty years the story of AN ENDLESS AND CONFLICTED LOVE, A MAN WHO PLAYED WITH FIRE AND NEARLY LOST HIS LIFE DOING IT, and ONE OF THE LARGEST AND MOST AUDACIOUS THEFTS IN CANADIAN HISTORY, was finally made public. I entitled the book: The Bridge to Caracas, for reasons that will quickly be obvious to readers. The genre is romance crime fiction, if there is such a genre.

If readers have half as much fun reading The King Trilogy as I did writing it, they will be enriched.

Tell us about your writing process.
I am definitely a seat of the pants writer. Using a ball-point pen and a letter-sized pad of lined paper, I write the entire story, longhand. Because no other human would be capable of interpreting my scribble, I do the typing. I do so using four fingers and an iMac. Having completed numerous self-edits, I enlist friends and family members to repeat the process. Finally, the manuscript is submitted to a professional editor.

For Fiction Writers: Do you listen (or talk to) to your characters?
I do both, extensively. Believable dialogue is a crucial component of my stories.

What advice would you give other writers?
There is an inverse relationship between the level of expectation and the degree of satisfaction.

How did you decide how to publish your books?
Having written an entire trilogy, I decided to share it with others. The project was never meant to be anything more than a hobby. The more I remind myself of that basic mind-set, the more fun the entire process is.

What genres do you write?: crime, romance

Website(s)
Link to Author Page on other site