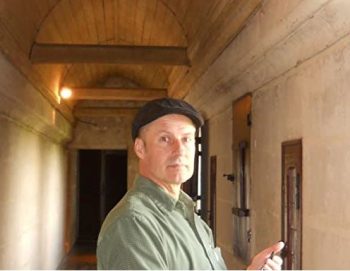 About Stanley Wheeler:
A part of me was born at the intersection of "once upon a time" and "where no man has gone before." As a result, I found that I was not well suited to the farm work and other labor I grew up doing. After completing an undergraduate degree and still finding myself without any marketable skills, I went to law school. I now work as a deputy prosecuting attorney. In my spare time, I engage in outdoor activities, or escape to other worlds and times by reading, or by writing the destinations myself.

What inspires you to write?
I find inspiration in that foreign country that is history, and in the fertile field of fantasy. Anything interesting or exciting can spark an idea or prompt me to work with an idea that I have been neglecting. A curious twist on a phrase or a sudden "what if" thought can become inspiration and motivation to fling figurative gray matter at the blank page to see what sticks.
The American Revolution and various fantasy elements, including magic and dragons, inspired my recent trilogy – Tomahawks and Dragon Fire which consists of Threading the Rude Eye, Power to Hurt, and Clamorous Harbingers. I'm currently working on the sequel trilogy.

What authors do you read when you aren’t writing?
Edgar Rice Burroughs took me to Barsoom, and that is one of the best destinations ever. Alexandre Dumas sent me through France and to England on swashbuckling adventures. Louis L'Amour rode with me through the American West, introducing me to cowboys and gunfighters along the way. Nick Cole has recently introduced me to zombies and space-faring legionnaires. Robert Heinlein lectured me to be a good citizen and took me to kill bugs. Kenneth Jorgensen has tangled me in the ways of the tama and the samurai. Raymond Chandler and Dashiell Hammett revealed the secrets of the gritty detective, and Edgar Allan Poe illuminated the recesses of the human mind. Mark Twain added humor, and Shakespeare demonstrated the eloquence and the amazing elasticity of the English language. All these and more are among my favorites. I know I'm forgetting several, but these I've named may be the best representatives of the rest.

Tell us about your writing process.
The writing process is a lot like making sausage for me. Ideas and inspiration with some foundational principles go into the grinder and it extrudes onto the page.
Ideally, I outline the major points of the story and get an understanding of how I want a story to end. I find that writing the outline with pen and paper is helpful. I like the feel of the pen in my fingers and the paper beneath my hand, but I compose the story itself through the keyboard. My outline is a suggestion at best. Once the characters begin to come to life, they create the details and take the story through territory more interesting and exciting than I had originally anticipated. The characters, like the story, only come into focus through the telling as they act and speak with other characters. I may begin with some idea of a trait or two for the character, but most of what they become grows from the writing.
It's important that I know what the end of the story looks like. I never write the ending first, but I have skipped to the end and written the conclusion after I have written a substantial portion of the story and have become stuck in the middle. That was useful for breaking the block and helping me to remember or to clarify the destination.
I find delight in expanding upon the original ideas with the inspiration that comes from letting the writing wander beyond the path I had anticipated and pressing into the unknown. Some of the more spectacular or consequential moments in my stories have come from getting the characters into a situation that I had not originally envisioned, or in realizing that the resolution I had planned was flawed, and being forced to conjure a new or different resolution.

For Fiction Writers: Do you listen (or talk to) to your characters?
I try to listen to the characters. When I have questions about where a character is going, or what role they will have, as determined by critical decisions, I review what they have said and done earlier, and that tells me what they will do when I'm questioning which way they will go.
I learn a great deal from my characters when the speak with the other characters. They ask things that I had not thought to consider earlier. I find conversation an extremely useful tool with which to discover character and motivation.

What advice would you give other writers?
Write. Continue to improve your craft. If your writing doesn't excite or intrigue you, it won't be interesting for anyone else either.

How did you decide how to publish your books?
I'm currently self-publishing my books. When I discovered the self-publishing possibility, I learned how to do it, from writing and formatting for ebook and paperback to creating the covers. I like to write exciting stories, and I get satisfaction knowing that others read and love my stories.

What do you think about the future of book publishing?
I think most authors will continue to realize less and less revenue from their writing while a few well known authors get the shelf space in the bookstores.

What genres do you write?: Flintlock Fantasy/Alternatie History/Swashbuckling Fantasy, Detective Noir, Western, Fantasy, and more to come I'm sure.