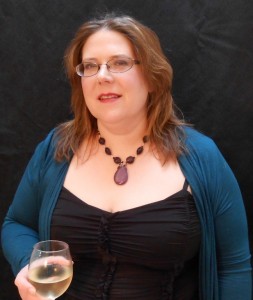 About Shawna Reppert:
Shawna Reppert, an award-winning author of fantasy and steampunk, is proud of keeping readers up all night and making them miss work deadlines. She believes that fiction should ask questions for which there are no easy answers, while at the same time taking the reader on a fine adventure that grips them heart and soul and keeps them turning pages until the very end.
“Definitely give this author a chance,” says one reader, “her storytelling will draw you in. Her style is just a hint of Andre Norton, a dash of J. K. Rowling, and the tiniest pinch of Anne Rice. The rest is her own unique stamp.”
Her debut novel, The Stolen Luck, won a silver medal for original-world fantasy in the Global Ebooks Awards and an Eppie for fantasy romance. The first two books of her Ravensblood urban fantasy series won gold medals for contemporary fantasy. The much-awaited sequel, Raven’s Heart, will be released on 2/6/15.
Shawna’s love of live Irish music and dance frequently influences her work. Her four-footed children are a Lipizzan stallion and a black-and-orange cat named Samhain who occasionally takes over her blog. Shawna also likes to play with the Society for Creative Anachronism, and can sometimes be found in medieval garb on a caparisoned horse, throwing javelins into innocent hay bales that never did anything to her.
She grew up in Pennsylvania, and now lives in the beautiful wine country of Oregon. Each has colored her writing in different ways.

What inspires you to write?
There are so many books that have touched my life. I want to pay that forward by touching others’ lives in the same way.

Tell us about your writing process.
I am a reformed pantser. I used to start with a character sketch or two and a vague idea of where the story was going, and charge on from there. It meant a lot of hitting dead ends, backtracking, rewriting. Now I always outline first. I find that, far from squelching creativity, outlining enhances it. Like an aerial photograph, it allows me to see how the roads and paths of the plots and subplots and character arcs intersect or run parallel, allowing me to plan the journey better.

For Fiction Writers: Do you listen (or talk to) to your characters?
A workshop I took taught me how to do meditations where I talk to my major characters, including the villain, asking them about their secret desires, hopes, and fears. When I first tried it with the protagonist of my Ravensblood series, his response was ‘Why should I talk to you? I don’t know you, and I have no reason to trust you.’. I have to admit, it was quite a surprise to get the brush-off from the creation of my own imagination!

Later, I shared this experience with Donald Maass in an online exchange via his blog, and he asked this question: ‘What is he hiding? What doesn’t he want you to see? That’s his secret vulnerability.’

Now, ‘vulnerable’ isn’t the first word that comes to mind when you think of Raven. He’s a reformed dark mage, still immensely powerful, and his interactions, especially with people he does not know well, tend to be reserved to the point of coldness. Yet Donald made me see that that chill exterior is his way of hiding his vulnerabilities, even from himself. Writing with a conscious knowledge of those subconscious vulnerabilities allowed me to give the character even more depth, especially when he begins to trust more people and that chill exterior starts to melt.

What advice would you give other writers?
Study craft, first and last. You don’t know as much as you think you do. The more you learn, the more you realize how very much there is to learn. Find beta readers and an editor you can trust, and sleep on it before you decide to dismiss any part of their critique. (But don’t totally dismiss your inner voice, either.)

If you’re just starting out, let me say that it takes more work than you can imagine. And then some. But it’s worth every bit.

Actually,most of this advice can probably be applied to most areas of human endeavor.

How did you decide how to publish your books?
I’ve been at this long enough that I remember when legacy publishing was the Only Way to Go. My first novel, The Stolen Luck, was high fantasy crossed over with male/male fantasy romance, and it came out with Carina, a small imprint of a larger publisher. Overall, I had a good experience with Carina. I learned a lot about the business, and it gave me the confidence to later put out my indie books.

But Carina wasn’t interested in putting out my urban fantasy series where the romance is only a small sub-plot, and I see myself as a fantasy and steampunk writer who writes an occasional romance crossover, rather than a fantasy romance writer.

So I started putting out my urban fantasy Ravensblood series indie, and decided I really liked the freedom to choose my own covers and market my own way.

I did submit a second high fantasy crossover with male/male fantasy romance to Carina, but they had undergone some editorial and management changes and elected not to pick it up. Another small press offered me a contract, but the cover they wanted to use belonged on an erotica novel (which this book was definitely not!) and the editor didn’t like or understand the book and seemed unfamiliar with modern writing concepts like deep third POV. I decided I could do a far better job myself, and so I broke the contract and brought out Where Light Meets Shadow myself.

I’ve now committed completely to the indie path. I’m very fortunate to have a top-shelf indie editor whose services are reasonably priced, a friend who is a professional in the tech writing field who copyedits for friendship and rum, and a stellar graphic artist who has volunteered to do my covers.

What do you think about the future of book publishing?
I think indie is here to stay. Why give over all the control and most of the money to people who may or may not know any more than you do?