You are here: Home / Interviews With Authors / Interview with Author – Sharon Stevenson @chettsgenie 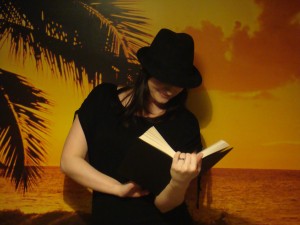 Author Bio:
Sharon Stevenson is the twisted mind behind The Gallows Novels and the After Death Series. If you want to know a bit about her, here it is: She spends too much time indoors and probably watches too many horror films. Some of her favourite things are; Alone time, people who know when to shut up, having a drink, eating pizza (usually after having too much drink the night before), reading books, adult swim cartoons, bad horror and sci-fi movies, proper good TV shows like Dexter & The Walking Dead, and last but not least having a laugh with her hilarious other half – this would usually include some of the above.

What inspires you to write?
I’ve been writing since I was about five years old, so making stuff up and writing it down is just something I’ve always done and can’t ever imagine not doing. My imagination has always been on the overactive side so writing is my release. I draw inspiration from many different sources, including books, movies and real life. Ideas usually fire up beginning with a ‘what if’ scenario and the ideas quickly snowball from there, mutating and taking on a life of their own.

Tell us about your writing process.
Once I have a fully formed idea, I like to get planning. I tend to write out a synopsis, and make some notes on the characters before I get started writing the novel. There are usually a few moments during the course of writing a novel where I will get stalled and this will either be because of something I don’t like that I’ve already written, or something that is coming up next that is bothering me. I deal with this by first checking what I’ve already written; if something isn’t right I cut it and start again, and if all is okay so far I write up chapter-by-chapter notes on the next few chapters, which helps me identify any problems and get writing again. I don’t believe in writer’s block. I don’t let myself stop when I get stalled like this, I make sure I fix the problem there and then.
I don’t have a set writing schedule, I grab time whenever I can get it which is mostly at weekends, and I can usually write the first draft of a full length novel in about 2 months. I believe in writing first and editing later, which helps me get my first draft out in this time frame. I find it helps to then leave this draft for a couple of weeks before beginning the editing process.
I usually write while listening music and I take a bit of time to find the right sound for what I’m working on. The Gallows Novels have been written almost exclusively to Twin Atlantic CD’s.

For Fiction Writers: Do you listen (or talk to) to your characters?
I don’t talk to my characters. I know this is something a lot of writers do, but it’s never worked that way for me. I see things play out in my head like I’m watching a movie. Sometimes scenes like this will pop into my head and I’ll have to write them down as soon as I can.

What advice would you give other writers?
Work hard, write what you want to, and never give up!

How did you decide how to publish your books?
I’m a control freak so self-publishing was a no-brainer for me. Different things suit different writers but for me self-publishing made the most sense.

What do you think about the future of book publishing?
As much as I try to keep up with all things publishing, I don’t claim to be any kind of expert on trends. That said, I think the future of publishing will see a rise in hybrid authors as more traditional publishers sign up bestselling indie authors, and as more traditionally published authors see the benefit in putting out self-published titles, alongside their other books.

What genres do you write?
Modern Fantasy, Urban Fantasy, Paranormal