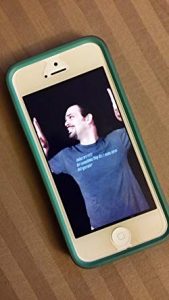 About Scott Richards:
Scott Richards is a dad, writer, gamer, and nerd – in that order, though sleep tends to take a back seat. When he's not chasing his kids, playing board games, D&D, or watching the latest Marvel release, he's writing fantasy novels (with the occasional scifi thrown in).

Writer of the Darrlici's Shroud series, the Before the Shroud trilogy, and more. Focusing mainly on the darker side of storytelling, Scott is never shy of the gritty edge of fantasy without tipping into the gore worthy of a slasher flick (exception: John Catcher, boy does he get into mischief).

Tell us about your writing process.
Hah! My writing method both annoys and fascinates other writers. I'm about a 10% plotter/world builder, and a 90% pantser. The fun part is in the actual writing. I write in chronological order, without any editing or formatting whatsoever. It is one massive wall of text that spans for tens of thousands of words. Then, on my second pass, I go through and separate everything out, clear up typos, clarify meaning, add detail, and so on. If I ever show anyone a piece of what I'm currently working on, that piece was specifically edited just to show off.

For Fiction Writers: Do you listen (or talk to) to your characters?
I don't interact with my characters directly. I will stick them in situations and observe, or imagine how they might behave in response to something, but I'm a third party, the "camera", and I simply write down what I see.

What advice would you give other writers?
Give yourself permission to suck. Everyone's rough draft is ugly. EVERYONE. Don't edit as you go, it's not going to be perfect. The most important thing is to get to the end of the story. FINISH the project. You can always edit it to death later. More than anything I've seen wouldbe writers stuck in a self-editing cycle they never escape from.

How did you decide how to publish your books?
Self-publishing just made more sense. I decide when to write, what to write, and my release schedule. I'm not a control-freak, but I do like the independence.

What do you think about the future of book publishing?
Exciting! Things are moving constantly, and now that ebooks have taken off in a big way, it's only going to get more interesting from here.

What genres do you write?: Urban fantasy and fantasy for now, but there's a scifi universe to be built down the road.