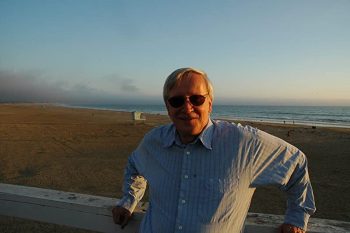 About Scott Cherney:
Born and bred like a fatted calf in Stockton, California, Scott Cherney has worn a lot of hats in his life and times, among them, a cowboy hat as a weekend gunslinger at the western amusement park known as Pollardville Ghost Town. He then moved over to the Palace Showboat Dinner Theater on the same property to become a triple threat actor/writer/director of several melodrama/vaudeville stage productions. In 1987, Scott was the winner of the one and only Stockton Stand-Up Comedy Competition.

His books include the road rage novel RED ASPHALT, the true travel tale PLEASE HOLD THUMBS, a collection of original comedy sketches called NOW THAT'S FUNNY, his movie memoir IN THE DARK and the western comedy entitled SONG OF THE CANYON KID.

Plays include the comedy melodramas LA RUE'S RETURN or HOW'S A BAYOU? (w/Edward Thorpe), SONG OF THE CANYON KID or POEM ON THE RANGE, THE LEGEND OF THE ROGUE or MASK ME NO QUESTIONS and ROXANNE OF THE ISLANDS or THEY'RE PLAYING OUR SARONG as well as the interactive murder mysteries DEAD TUESDAY and MURDER-THE FINAL FRONTIER.

He currently lives near Portland, Oregon.

What inspires you to write?
What inspires me more than anything is the absurdity of life…my life, in particular, but everything is so crazy that I look normal in comparison. Holding a mirror up to the world or even my own face helps me find ways of coping with life enough to put it all down in words if, for nothing else, proof.

What authors do you read when you aren’t writing?
So many favorites, so little space… John Steinbeck, Paul Auster, Richard Brautigan, Tom Robbins, Francine Prose, Michael Chabon on the fiction side on Laura Hildebrand, Jon Krakauer, Erik Larson and especially Susan Orlean on the non-fiction side.

Tell us about your writing process.
Music makes the world goes round in my imagination so it is necessary from beginning to end. Whether it be something that relates to my writing or ambient musings, music helps me almost more than anything. Then there's the thesaurus…

For Fiction Writers: Do you listen (or talk to) to your characters?
I listen to them more than they listen to me. Sometimes I feel like a court reporter, jotting down everything they say. Of course, I have the power of editing which gives me the upper hand.

What advice would you give other writers?
Don't follow my lead. Get started early. I may be having a late third act resurgence here, but the first two acts suffered from too much procrastination.

How did you decide how to publish your books?
Going the traditional has always been a long and arduous process, usually to my detriment because the clock-and calendar-are not my friends. Self-publishing opened up a whole new world to me, but it's not for the squeamish, unless you don't want to sell any books. Do your research.

What do you think about the future of book publishing?
The death knell on print has been pre-mature since e-books haven't taken the world by storm as promised (audio is better). The possibilities of everything still exists with the advent of self-publishing since traditional houses with their ephemeral tastes are f going the way of the Dodo.

What genres do you write?: humor, literary fiction, essays, plays