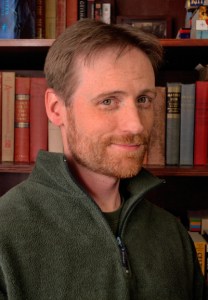 About Russ Linton:
In the fourth grade, Russ Linton wrote down the vague goal of becoming a “writer and an artist” when he grew up. After a journey that led him from philosopher to graphic designer to stay at home parent and even a stint as an Investigative Specialist with the FBI, he finally got around to that “writing” part which he now pursues full time.

Russ creates character-driven speculative fiction. His stories drip with blood, magic, and radioactive bugs. He writes for adults who are young at heart and youngsters who are old souls.

What inspires you to write?
I write about people with superpowers and magic and all manner of fantastical beings. However, normal people doing amazing things inspire me most.

Right now, inspiration is close at hand. My wife inspires me because after her arduous work days, hour-long commutes, and a trip to the gym, she heads to her home office to study for her M.B.A. My son inspires me because despite his dyspraxia, which makes motor skills challenging for him, he’s learned to play the violin and mandolin. (Sure, the fact that he enjoys playing Irish drinking songs may be a bit of a parenting fail on my part, but one thing at a time here.) An acquaintance of mine is struggling with a cancer diagnosis and chose to blog about her experience with the world. That, to me, is inspiring.

Tell us about your writing process.
I don’t outline, though I’d like to.

I’m one of those “whole brain” people. Tests for right and left brain dominance come back split right down the middle. The idea of an organized, structured plan is appealing to that logical thinking left side but the right side always says “oooh, oooh, I got this idea” and starts typing.

Usually that idea starts with a vague theme or maybe an opening scene in mind. The characters, the circumstances, sometimes my mood, all dictate which direction the story goes. I’ll even create elements in scenes which I have no clue what their purpose is at the time but become important anchors as I build around them.

Where my left brain starts freaking out and shouting “I told you so” is when I’m about sixty or seventy thousand words in and figuring out just how much work it is going to be to tie up all the threads I’ve created. That’s when the frantic much-too-late-to-be-a-proper-outline attempts start.

For Fiction Writers: Do you listen (or talk to) to your characters?
No. Next question.

What? No, I’m not saying that. Stop. I know you’re trying to be all cute and witty but I’m just not in the mood. Really, drop it. You’ll do what?

‘Only when my meds are low.’

There, I said it. Happy, Spence? Now all these readers think I’m certifiable.

What advice would you give other writers?
Work your ass off. Craft, platform, marketing, submissions – none of it is easy. This will be the hardest thing you have ever done and if it isn’t, you aren’t doing it right.

Accept criticism and use it to improve. Surround yourself not just with blindly supportive people but also critically minded people who want you to succeed and share similar writing goals.

Forget about being the “next big thing” and focus on being as pure of a “you” as possible.

How did you decide how to publish your books?
I would advise future authors to explore and weigh every option available to them. The old “traditional” versus “self” debate isn’t really valid anymore. Both avenues are viable choices depending on your goals.

I did shop Crimson Son to a few select agents before going the self-pub route. The feedback I got (aside from the typical form letters) were things like “I’ve tried superhero fiction and it didn’t work” or “we don’t really have a place for this in our line-up” or “guys that age don’t read, they play Xbox”. I had written a fairly niche book for a potentially un-lucrative market.

Traditional pub doesn’t want that. They want stuff they can sell the bejeebers out of. I could have started testing the waters with some indie presses, but I wanted more control. I wanted a look behind the curtain and to let Crimson Son sink or swim based solely on my efforts.

With a niche work, I think either self or indie pub is a better route because chances are with traditional publishing, you won’t make the massive numbers they require and your work will be pulled before it has a chance to really build a following. Generally when that happens, your rights are locked away as well. As a self pub, the book has all the time I decide to give it and my rights are always 100% mine if I decide a different approach is necessary.

The loss of the paper book won’t happen tomorrow, or even next year, but it will happen. Look, anytime I can click a button and send my 400 page novel out to millions, it is a win. The paper book requires trees to be cut, pulped, paper formed, printing, then shipping however many tons of that dead tree across the world (before and after printing). There is simply no way paper can compete with a mouse click.

Tablets will probably be free in the not-so-distant future and even the eReader prices of today aren’t crazy considering the cost of paperbacks (due to all the printing and shipping). If you are even a mildly avid reader, chances are you could save money with an eReader and cheaper eBooks.

Yes, for now, we’ll still enjoy a sort of stand off between the print and digital worlds. But all it will take is one generation to tip the balance. Already, my son’s school doesn’t hand out textbooks. Barnes and Noble, one of the few national chain holdouts, is slowly fading. The writing on the LCD is pretty clear.

What genres do you write?: Fantasy, Science Fiction, Horror