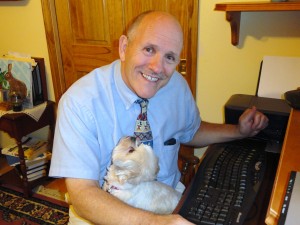 Author Bio:
I attended Ohio Wesleyan where I struggled with physics. Having made so many mistakes in college with physics, there weren’t too many left to make and I did quite well at graduate school at Purdue.

I worked for twenty years at Choate Rosemary Hall, an exclusive boarding school in the heart of Connecticut. More often than not, students arrived in limousines. There was a wooded area by the upper athletic fields where I would take my children for a walk. There, under a large oak tree, stories about elves would be weaved into the surrounding forest.

Returning to my home town to help with a father with Alzheimer’s, the only job open was at a prison. There I taught an entirely different clientele whose only interaction with limousines was stealing them. A year later Alfred State College hired me to teach physics. I happily taught there for over ten years. A rural, low income high school needed a physics teacher and the superintendent, a friend, begged me to help out. So, I am finishing my teaching career in a most fulfilling way… helping kids who would otherwise not have access to a qualified physics (and math) teacher.

My wife pestered me about putting to “pen” some of the stories which I had created for my children and kids. I started thinking about a young boy and a white deer, connected, yet apart. Ideas were shuffled together, characters created and the result was the Return of the White Deer. This book was published by the Martin Sisters.

Years ago I gave a lecture on evolution. What, I wondered, would be the next step? Right away I realized that silicon ‘life’ had considerable advantages over carbon-based life. Later this idea emerged as the exciting and disturbing story called Reap the Whirlwind, my most recent novel.

I have many other stories inside my mind, slowly forming, patiently waiting for the pen to give them breath. Perhaps someday I will even write about those elves which still inhabit the woods in the heart of Connecticut.

What inspires you to write?
Giving words and paragraphs, neatly ordered, clearly stated, about different ideas and scenarios.

Tell us about your writing process.
For me, stories grow on paper. They start as a seed, basically just a notion, but usually a unique and interesting one. For example, in Reap the Whirlwind, the seed was the exponentially growing memory and capability of computers. What would happen if a computer could actually think for itself and recognize that it existed?

I figured the computer would recognize immediately its greatest threat: man. So, my writing began with one man, Whit Emerson. Then I write and write, adding new characters as necessary. A love interest is always fun so one of my characters had to be young lady. Of course, there had to be a bad guy. Actually maybe one or two.

After my first draft, I think about how my characters are behaving. Whit starts confused, forlorn, helpless. As the story evolves he becomes more certain, daring, and a leader. The characters take on personalities. Sometimes a personality changes. This happened to Jimmy Northup. He started as a kind, intuitive detective. However, he seemed darker. His actions became more malevolent.

By the fourth draft, the characters are writing their own lines. Jimmy had a mean streak, but why? I had to give more depth to him to explain his sometimes malicious behavior.

By the fifth draft, the story is pretty much set. Then I start the editing process: choosing just the write word, turning a phrase to make it more memorable, amplifying the scene. With both books, I edited the entire manuscript over a dozen times. Then, and only then, I show it to some beta readers. After their comments, more editing.

For Fiction Writers: Do you listen (or talk to) to your characters?
Talk to them? No, absolutely not! I’m not that crazy. I do, however, listen to them all the time. They are usually very persuasive.

What advice would you give other writers?
Don’t wait. Just start writing.

How did you decide how to publish your books?
I think it is best to start with a publisher. I was fortunate to choose a good one. The company has helped me a great deal. Now, however, I plan to self publish. I need more control and my profit margin is considerably better.

What do you think about the future of book publishing?
Ebooks and self publishing will increase.