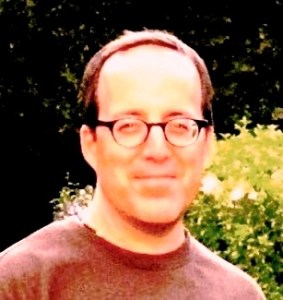 About Robert Guerrera:
Born in Alaska and raised in California, Robert Guerrera earned his Bachelor of Science in Business Administration at San Jose State University. In 1993, he moved to Texas where he earned teaching certificates in elementary education and in secondary social studies at the University of Texas – Pan American. Ever since, he has been teaching Elementary, Middle, and High School students.
After teaching in the United States for several years, his traveling itch and curiosity to learn about different cultures led him into an international teaching career. He has lived and worked in the Dominican Republic, Mexico, and Switzerland. Presently, Robert Guerrera lives in Switzerland with his wife, his two children, and his black cat. He teaches English, history, and geography at a private bilingual school, travels, plays the guitar, and writes.

I’m also a part time stay home dad, to be precise. That’s who I am.

My wife and I have always dreamed of the idea to share the work, at school and at home. When I was offered a 50 percent job in Switzerland seven years ago, we grabbed the opportunity. My wife worked 20 percent and it was a year of pinching pennies.

A year later, my wife could increase her percentage at a local high school to 40 percent and that was when we really experienced what our idea meant. It was a turbulent year. Tough on my part since I wasn’t the typical male provider anymore. Tough on my wife’s part, because I entered her domain at home and with the day to day decisions about the children. Two ways of upbringing, two cultures clashed at first. But we managed and grew stronger.

Six years later, we are still living that model. Our boys are used to the idea of mom and dad taking turns and being home. Yes, we earn less than we could. Yes, we could buy a bigger and newer car and house. Yes, we lose on pension. But we have enough, time is of the upmost improtance. And nothing would ever compensate the time that we have at hand for our children and for each other, the true luxury of our days. Living simple and slow is rewarding and healthy for anyone willing to give it a shot!

What inspires you to write?
Dear World,

I would just like to share some thoughts on writing. I began writing two years ago on a realistic fiction tale titled Zero Is The Key. Why did I begin writing? There were many reasons. I have read many books with my grade school, middle school, and high school students as an English and history teacher. Most books were good, but some of the books were laborious for the students because the concepts were highly abstract while the story didn’t move along quick enough, or there were just too many parts that stalled the story. For nearly twenty years, I always wondered if I could write a story that would appeal to my students. Then, I had children. When they were old enough to listen but not ready to read, I began to tell stories before putting them to bed, by just improvising them on the spot.They seemed to enjoy the tales very much. The stories were mostly action and adventure involving real exotic places from all over the world. My children loved them. I also tell real-life historical stories to my history and geography students during lessons. They loved them, at every age level.

One day, my wife says that I should write a book to put some of my ideas in writing. I agreed. Two and a half years later, my first title was published. What a thrill! I write out of passion, for relaxation, and to turn kids on to the world and its many fascinating places, ancient and modern, and to help students learn how connected we all are in our past and in our present. Hopefully, when a young person reads my books, she will put the book aside and decide to learn more about the various topics and obscure yet intriguing settings I write about. Maybe, just maybe, the reader’s awareness of how we are all the same, connected, and struggling through the same problems in life will lead to a better world. Sound sappy? Yes, it does. But it’s my hope, so there.

This letter is for those who are thinking of writing and publishing but haven’t tried it yet, or for the ones who want to start that second book but haven’t yet. Do it! I hope many people as possible read my books and walk away feeling turned on about the world which mostly is a positive place, unlike what we watch and hear on the negative media that bombards us and our young people every day. Young people need more positive stimuli and perceptions, and to be inspired about the world they are going to shape.

To everyone: keep writing and leave your inspirational mark on the world. Feel positive about it. Take care.

Tell us about your writing process.
I usually begin with a hook idea for the plot and try to write with the end in mind…not an exact end in mind, but I write toward it and let the story develop ist own end. A General timeline and character webs are developed in the pre-writing stage. However, the story develops itself as the fingers pound away at the keyboard. It is a holistica and organic process of writing actually.

For Fiction Writers: Do you listen (or talk to) to your characters?
So far, I haven’t engaged with my characters aloud. Although, I think it would be quite productive to do so!

What advice would you give other writers?
Don’t stop writing!

How did you decide how to publish your books?
I decided to go with a Publisher with a proven POD track record.

What do you think about the future of book publishing?
It is very exciting to see the book industry Metamorphose into an organic, barrier-free, author friendly arena. Nobody knows what the industry will look like a year or even five years from now. This is so exciting!

What genres do you write?: Currently, it is earth based, realistic science fiction for middle grade to young adults.