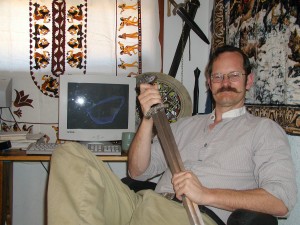 Author Bio:
Rob is a former army scout and infantryman, classified courier, locksmith, alarm/video technician, and security guard, He now makes his living in the tamer environment of emergency medical care as an X-ray and medical technician.

What inspires you to write?
I’ve always been fascinated with stories. At some point–despite dyslexic spelling–I just began writing them down.

Tell us about your writing process.
Okay, this is an easy one. I am strictly a ‘seat-of-the-pants’ writer. I just sit down and toss a character into a troublesome situation. The story builds itself. I often have an idea where it’s going, but just as often . . . it goes somewhere else.

For Fiction Writers: Do you listen (or talk to) to your characters?
I listen to characters all the time. ‘What would X character say?’ is always a good question. If I don’t know, then I realize that I haven’t defined the character well enough yet.

What advice would you give other writers?
Tips that I’ve taken from others (which I’ve found helpful):

– Don’t edit when you write. Editing is ‘logical’ and writing is ‘creative’. They come from opposite sides of the brain. Write whatever trash comes out– leave gaps– name characters ‘X’ or ‘Y’– but write while it’s flowing. Get the story down! All the mess you make, the holes you leave, the names you need to change, that stuff will all be easy for you to correct when you edit your work. There’s hardly ever any sort of ‘writer’s block’ when you edit. If you stop to edit while you are creating the story, you bog down the creative process. Write the story first– edit the story later.

– Quit while you’re ahead. That is, stop in the middle of some action. When you end a writing session in the middle of an action, you will start right up again when you come back. If you stop at the end of a scene, when you come back you’ll be scratching your head wondering what to write.
– Don’t get thin-skinned with your editor. You don’t have to follow their advice like a sheep, but understand that they are trying to help you say things so that the readers will see the wonderful work you’ve created in the way you mean them to.

How did you decide how to publish your books?
Publishing (At this point Author runs in circles and bites own butt!)

I’ve heard and experienced the most terrible things with publishing. I’ve known of :books being lost by the publisher, people being scammed, books being rejected by numerous publishers only to go on and become best sellers. If you even listen to the industry at all, you’ll hear really disheartening stories.

To say the least, it is an irritation to spend hundreds of hours of your time writing a book, send it off to a publisher, then after not hearing anything for 9 months having to query them to get an answer of, ‘Oh, didn’t we inform you months ago? We decided to decline your submission.’ (Ouch!)
So, I would advise folks to explore small publishers, on-line magazines, and self publishing. (Self publishing only if your editing is good or you know someone who can edit for you.) I’ve had good experiences with small publishers and it’s a way to become known in the industry. It’s really a blessing when Editors contact you asking for work instead of you having to try and dig up markets who might want your work.

What do you think about the future of book publishing?
I think we’re in the midst of a tremendous flux. I have a library of over 1,200 books. I love to browse books and flip through illustrations. However, to have the power of an electronic tablet–an entire library in your pocket–is amazing. I don’t see how paper publishers will survive in the long run. The process of printing tons of books– shipping them out– then destroying any which were not purchased in x number of weeks is so wasteful.