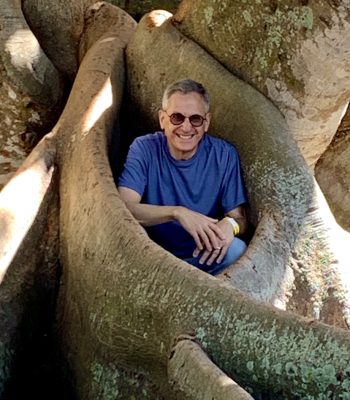 About Rick Moskovitz:
I am a Harvard educated psychiatrist who taught psychotherapy and spent nearly four decades listening to my patients tell their stories. After leaving practice, I, in turn, became a storyteller, writing science fiction that explores the psychological consequences of living in a world of expanding possibilities, including even the prospect of evading death.

My Brink of Life Trilogy begins with the quest for immortality in the mid-21st century and concludes with a search for the origin of human life. My characters deal with enduring moral and emotional struggles against a backdrop of a near future world that is still dealing with environmental crises as it navigates the intersection of human and artificial intelligence.

In Shared Madness, I returned to my roots as a psychiatrist to write a first person tale of a psychiatrist who, while treating a psychotic patient, descends into madness and finds himself at the nexus of a deadly mystery.

Carousel Music explores my fascination with the subjective and malleable nature of memory and how our memories create the narrative of our identities.

What inspires you to write?
As I watch the current generation of young adults assume their leadership roles in our culture, I see once again the youthful illusion of immortality and invincibility, this time with a twist. The Singularity, predicted by Ray Kurzweil, is close upon us and with it the prospect, at least in the eyes of the young, that life everlasting is in their grasp. And I wonder, given the temptation to extend life indefinitely, how the choices will be made and at what price the reality of immortality might come. These questions became the driving force behind A Stand-in for Dying, the first book of the Brink of Life Trilogy.

Tell us about your writing process.
My writing process begins with the concept for the story, including how I plan for it to end and any key plot twists. The outline for the intervening narrative tends to be rough, with the stories evolving organically chapter by chapter. Once I have an idea of the cast of characters, I write first person backstories for each of the major characters to provide a framework for their motivation and behavior.

As each chapter develops, I consider the possible crises the characters might face, but often not envisioning their resolution until the chapter is underway. When I find my characters in seemingly inescapable peril, I often resort to intense aerobic exercise, accompanied by music with a downbeat. During such improbably overstimulated intervals, the solutions to their dilemmas usually materialize from somewhere in my subconscious mind.

This is not to say that I never get stuck. I wrote the first handful of chapters of Shared Madness (originally titled Folie a Deux) in 2006 and lost my momentum. I stumbled upon the file in 2019, decided it was worth completing and finished it in 2020, with the writing flowing spontaneously.

For Fiction Writers: Do you listen (or talk to) to your characters?
When I'm working on a story, I often spend much of my waking time living alongside my characters in the world they inhabit. I write their backstories as first person narratives to give them an opportunity to tell me about themselves from their points of view.

There have been rare moments in which it has felt like characters have taken over the writing of their stories. While writing Carousel Music, I pulled the name of a character, an expert witness, out of thin air from random syllables, decided that it sounded Eastern European, and after assuming the character's age, he emerged as a Holocaust survivor with his own trauma history. Twenty pages poured out in the next couple of hours that are still among my favorite passages.

What advice would you give other writers?
Focus on the journey, not the goal. immerse yourself in the process of telling your story and enjoy it. Decide what you want to say and who would be important to hear it. If you get stuck, back off for a while (not necessarily a decade though!) and work on something else. A fresh look can provide new inspiration.

How did you decide how to publish your books?
My first book, Lost in the Mirror: an Inside Look at Borderline Personality Disorder, was traditionally published and sold well. It took, however, six years and many revisions and submissions from when I first completed the manuscript to publication.

As a vintage human being, I haven't the patience and perhaps not the time for a years-long quest for publication. And it's more important for me to create a permanent archive of my writing, which is my legacy, and to give others an opportunity to read it than to sell a lot of books for profit. For my fiction works, I've therefore turned to Print on Demand, which is the fastest way to bring work to print and can be very user friendly, once you've published your first book. I commission artists to create my covers for maximum impact. The caveat is that promoting self-published works is a time intensive uphill struggle that only a few dedicated authors have mastered, no matter the quality of their work.

What do you think about the future of book publishing?
I expect that future models will allow for relatively rapid publication of new works without sacrificing quality or prestige. Hybrid publishers, which share the financial risk with authors, maintain some of the selectivity and quality control of traditional publishers, while streamlining the path to publication.