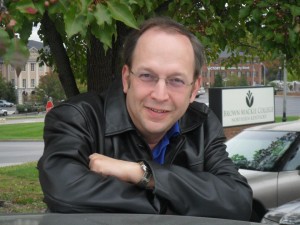 Author Bio:
Rick L. Phillips was born in Covington, Kentucky to Louis and Margaret Phillips. He received a BA in Radio, Television and Film Communications from Northern Kentucky University. He is an announcer and voice actor and his agent is the Heyman Talent Agency in Ohio, Kentucky and Indiana. His first professional story was a short story titled “War Between Two Worlds” published in the book “It’s That Time Again Volume 3”. It was edited by the late, great writer and editor Jim Harmon. His next book that was published was a children’s book. It was his creation called “Dinky the Elf”. He is the author of the Joshua Adams mystery “Last Train to Murder”,the superhero book “Project:Hero” and wrote short stories for as well as conceived and edited the book “With Great Power”. Currently he is working on a new novel as well as the second in both the Project: Hero series and the next one in the Joshua Adams Mystery series. Both of his parents were Sunday School Teachers and his father was a Deacon in his church. Rick is also a Christian. He was a Sunday School Teacher for 3 years and is active in the church choir and has sang solos and as part of a group at other churches. Like his Father he is now a Deacon in the church. He lives in Kentucky with his wife Violet.

What inspires you to write?
I have always had stories that I wanted to tell and tried go into TV or Film but that didn’t work out so I decided to tell them in book form.

Tell us about your writing process.
I write by the seat of my pants. I usually have the plot in mind but just figure out how I get from point A to point B as I go along.

For Fiction Writers: Do you listen (or talk to) to your characters?
I listen to my characters. They seem to know what is going to happen before I do.

What advice would you give other writers?
Write every day. Even if it’s just one sentence. You don’t want to get out of the habit.

How did you decide how to publish your books?
I tried the traditional way but had little luck with that so I took the independent way.

What do you think about the future of book publishing?
I would rather have the printed word but I think e-books are the way they will go in the future. Print will stay around for the older generation but eventually it will be all e-books.

What do you use?
Co-writer

What genres do you write?
Childrens, mystery, science fiction