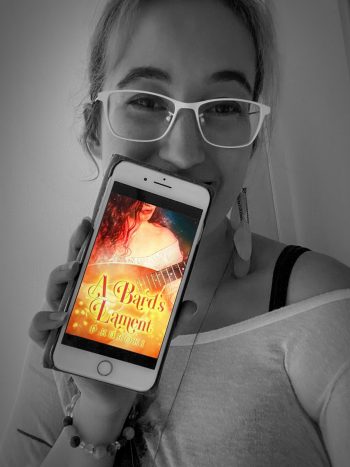 About Poppy Kuroki:
Poppy Kuroki is a professional ghostwriter and editor. She loves books, Dungeons & Dragons, and playing video games. She currently lives in Enoshima, Japan with her husband and dreams of owning a dog.

What inspires you to write?
I get inspired by great stories around me, in the form of books, movies, video games, or real life. Sometimes I'll create a character based on someone I've met or seen on the street. Sometimes I think to myself, "What if ____?" and a story idea comes from that. My novelette, A Bard's Lament, was inspired from a YouTube singer! Ideas can come from the most random places.

What authors do you read when you aren’t writing?
My favourite fantasy authors are Jay Kristoff and Rebecca Ross, and i'll always have a soft spot for Jacqueline Wilson since I grew up on her books. Though I don't write horror (yet) I absolutely love horror authors like Darren Shan, Stephen King, and James Herbert.

Tell us about your writing process.
I usually have an idea and sit on it for a while. If it keeps coming back, I'll work and develop it. That being said, the idea for Oath came in one night (while I was playing The Elder Scrolls IV: Oblivion) and I got up and wrote the entire outline in an hour.

I'll usually start with a character and go from there, putting them in a situation and see what they do about it. I'll usually ensure I have a beginning, middle, and end before I start actually writing.

I use Microsoft Word, always have done! I usually end up with folders and folders of notes or excel sheets.

For Fiction Writers: Do you listen (or talk to) to your characters?
I know some people say they do, but no, not really. I sometimes have trouble getting into the skin of my characters. Of all aspects of the writing process, character development is the most challenging.

What advice would you give other writers?
Read a lot, especially in your genre. Be humble. Be open to criticism, so long as it's constructive. Accept that your books won't be loved by everyone. Write a little every day, even when you're feeling uninspired. And always, always work on improving.

How did you decide how to publish your books?
A couple of years ago I self-published a fantasy trilogy. I didn't really know what I was doing; I paid someone from university to make a bad cover and went in blind with zero marketing experience. Then a publisher picked it up and THEY didn't know what they were doing, either. I ended up firing them and that's when my closest friends turned around and said my books were full of errors and the cover was awful. It left a bad taste in my mouth and put me off self-publishing for years.

To me, it was a waste of time and money, and my confidence was dented, too.

I've been editing books for years and started to think that's what I should stick to. Then when I started ghostwriting in October 2019, I got terrific feedback from clients who were super enthusiastic about my writing (I won't repeat what they said!). It gave me some of my confidence back.

Then when I heard that traditionally published authors have to self-promote just as much as self-published authors, that was the final nail in the coffin. Why exhaust myself pitching queries to hundreds of agents and publishers when I could do the whole publishing process by myself, on MY schedule?

I had a BLAST producing A Bard's Lament. I got to work with talented editors, beta readers, a narrator, and even a singer who composed and sang the book's songs. It was a great experience and now that I actually know what self-publishing entails, I went into it having fun rather than being stressed out.

For new authors looking at self-publishing, do your research first. Build a website, make a Facebook page, a blog if you like. Watch YouTube courses, take a course or buy a book on how to do things properly (there are plenty of free resources out there too). You won't regret it.

What do you think about the future of book publishing?
It's very exciting! Self-publishing is being taken a lot more seriously than it used to be. Once you know how to do it, it gets a lot easier.

What genres do you write?: dark fantasy, steampunk