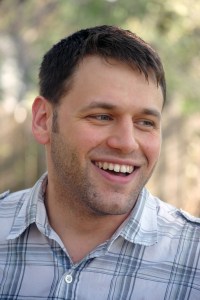 About Peter J Story:
Peter J Story lives in San Antonio, Texas with his wife and their two pugs. He writes code by day and fiction by night, considering himself an author of deliberate, genre-free stories with a soul. While his is not a pen name, he does enjoy chuckling to himself about how well it suits his passion.

Being extremely shy as a youngster, Peter spent his days in two primary hobbies: studying people and reading. He found both pastimes equally fascinating. Among his favorite characters were Encyclopedia Brown, Sebastian the Super Sleuth, and Sherlock Holmes. When in search of new mystery stories, he read “Murder on the Orient Express” and found the tale intriguing. Unfortunately, he felt that the name “Hercule Poirot” was unseemly, and abandoned any further inquiries in the character’s direction.

Then one day, at the age of ten or so, Peter’s uncle introduced him to the work of J.R.R. Tolkien, and his world changed forever. He was carried away by the story and tried his hand at mimicking the epic. Unfortunately, due to his existing love for “Star Trek: The Next Generation,” this took an unholy turn toward a hybrid of the two worlds. But he enjoyed it, nonetheless, and isn’t that what matters most? Of course it is.

As he grew, Peter learned to enjoy a variety of new writers, such as George Orwell, Leo Tolstoy, Herman Melville, Ernest Hemingway, Fyodor Dostoyevsky, Stephen King, Dave Barry, and C.S. Lewis, all of whom had a tremendous impact on his writing style. He planned to go to college (with a vague notion of majoring in something to do with literature), then decided to instead spend seven years as a missionary (mostly in Mexico City). The time paid off, however, and taught him even more about human nature and the art of telling a subtle, character-driven story.

What inspires you to write?
This may sound trite, but I write because I have to. I spent several years in volunteer service abroad, and another several building a career as a programmer; but always in the back of my mind there was that itch to write.

Perhaps it’s because I’m an avid daydreamer. I grew up without an abundance of toys. Video games were an uncommon luxury, and a lack of cable TV meant that entertainment was sparse in our household. Because of that, I turned to world-building in my own mind. The few toys that I had were drafted into myriad roles as I dreamed up new stories, new landscapes, and new universes.

I also became a reader. Hours of entertainment can be found in a good story, and I delved into the worlds of Tolkien, Lewis, and Melville. Perhaps the exposure to great literature spurred my own literary aspirations. Whatever the source of that literary itch, though, the answer is the same: I write because I have to.

Tell us about your writing process.
I work in a field that revolves around organized data. That (plus traces of OCD) drive me to be extremely organized in my writing. One aspect of an organized process is using the right tools – in my case, the right software.

In writing my first novel, Things Grak Hates, I worked almost entirely off of Google Drive. From the first sketch of an outline all the way through final editing, I ran everything off of that online platform. The benefit: it’s easily accessible from anywhere with a decent internet connection. Any time I had a spare moment, I could log on and bang out a few lines. The drawback is that it can be an exceptionally frustrating bit of software. For one, it relies entirely on a steady internet connection. More than once, I lost a large chunk of work because the connection went down.

I’ve since switched to using Scrivener, and I’m quite pleased with it as a writer’s tool. Scrivener kindly offered to sponsor my book tour, and I’ve been loudly singing their praises ever since. I highly recommend it to any writers (whether or not you’re organized in your approach).

For Fiction Writers: Do you listen (or talk to) to your characters?
I think this might vary from one story to the next. In writing Things Grak Hates, I let Grak lead the story. Because I was dealing with the depravity of human nature, I had to let him run his course. Our worse nature is something we usually keep in check, so I constantly felt the urge to stop Grak. On multiple occasions I wanted to say, “You just can’t do that!” but then I’d have to step back and let his story run its course.

What advice would you give other writers?
Just start writing – and don’t talk yourself out of it. It’s so easy to doubt yourself, especially when you’re writing your first book. Quit comparing your writing to anyone else’s, and quit procrastinating. Just grab a drink (if you are so inclined), sit down and let the words out.

How did you decide how to publish your books?
Things Grak Hates is a very singular story, and I wasn’t sure everyone would get it. I wanted the freedom to write without anyone dictating how the story should go. Because of that, I decided to go with a small indie press. This gave me tremendous freedom to write what I wanted how I wanted, and I’m very happy with how it all turned out.

What do you think about the future of book publishing?
While I admit that it all seems a bit dismal at times, I believe that there will always be a market for a good story. Fortunately, getting a story out there has never been easier. Unfortunately, getting noticed is just that much harder.
Overall though, I do believe the future of publishing is hopeful. I do also thing that self-publishers and indie presses will begin to lose much of their stigma as more and more authors choose this route.