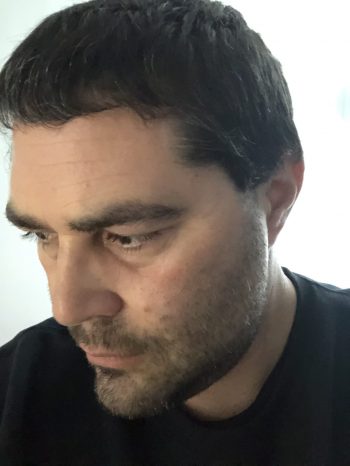 About PD Alleva:
PD Alleva is an alternative fiction author. His novels cross genres, blending mystery, conspiracy, psychology, and action with horror and dystopian science fiction. Alternative fiction is PD’s attempt at describing what readers uncover in any one of his books, a new discovery towards mainstream storytelling. He’s been writing since childhood, creating and developing stories with brash and impactful concepts that he would describe are metaphors for the shifting energies that exist in the universe. PD exists inside of his own universe, working diligently on The Rose Vol. II and exceptional horror novels. Be prepared for Golem, PD’s upcoming horror thriller.

What inspires you to write?
A dire need to develop, create, and publish stories that stand the test of time. I garner inspiration from great storytelling, conspiracy theories, and interests in alien lore, the surreal, the unknown, mythology, philosophy, quantum physics, and the metaphysical. Also books, movies, music, old Pulp Fiction magazines, and nostalgia.

If I’m feeling uninspired I’ll gather inspiration through old movies and old songs and music. Old books too or movies about those old books. I like to tap into the emotional creativity from long ago. Long ago for me being in those youthful days when life seemed like it would last forever with a Superman chip on my shoulder of immortality. A time when creativity was found in every corner. I’m a child of the 90’s, a plaid wearing, board short sporting, mosh pit moshing red-blooded grunge kid. If there’s a time when I’m feeling uninspired I’ll tap into this youthful mindset, toss on some 90’s music or search for a movie – doesn’t necessarily have to be a movie made in the era, just a movie I watched during that time that had a significant impact – I haven’t seen in a long time.

For instance, I’m currently writing a horror thriller novel titled Jigglyspot and the Zero Intellect, a story that pays homage to the grindhouse movies of the seventies, B rated slasher movies in the eighties, old scif-fi movies like 2001: A Space Odyssey, The Black Hole, or Journey to the Center of the Earth (the original not the remake), and the Pulp Fiction literary era that existed from the 1920’s to 1950’s, a time that spawned a plethora or great writers including Ray Bradbury, H.P. Lovecraft, and L. Ron Hubbard. I’m about to pass eighty thousand words for Jigglyspot but one of the characters, Kera, keeps giving me trouble. Apparently she’s not satisfied with the way I’m crafting her personality, she keeps forcing me to do rewrites, which, as a writer, is awesome because it helps to grow the craft, pushing the limits and forcing me to delve deeper to do justice and reflect how she wants to be portrayed. Yes, I’m referring to a fictional character whose life was spawned inside my head. But the side effect of all these rewrites was the need to garner more inspiration. Some might call this writers block, although I don’t see it this way because I continue to write and go back to the chapters and scenes to pen Kera as she wants to be seen.

What got me out of this creative funk was 2001: A Space Odyssey and Stanley Kubrick’s obsession with making the film (I watched a few documentaries). But let me shed some light on this because I don’t want you to think that any one of the characters in Kubrick’s masterpiece has anything to do with Kera, not in the least. What I required was inspiration, a muse towards creative performance, drive, and renewed vigor. It’s not always the story details, character depth or overall plot from the movie or book that drives this creativity but rather the creative process itself that taps into that streamlined passion from the past in order to deliver in the moment. Understand that it’s not the movie (book, television shows etc) or the director but rather my experience of the movie. It’s the memory of witnessing the film. There’s a sensation that exists in that moment from the past. There’s feeling inside of it; an emotion that stirs the muse of creativity further into the mind, heart, and soul with a desire to do more; to do better, to learn to go deeper into the craft, and understanding the characters in the depths of the story.

So, to make a long story short, this process – watching 2001 – broke open the floodgates that drove the character depth and ideas required to pen Kera in the way she wants. Hope this makes sense and that I haven’t gone too far off the mark.

What authors do you read when you aren’t writing?
Blake Crouch, JD Barker, John Connolly, and VE Schwab. Ray Bradbury, Stephen King, H.G. Wells, Clive Barker, Lovecraft and Poe. The list goes on and on.

Tell us about your writing process.
Once the idea drops into conscious thought (usually as a theme or circumstance) I start to take notes and send emails. More often than not the ending is one of the first to manifest. Characters then begin to develop at this point, which I refer to as setting up a chessboard. Simultaneously the plot develops, usually with particular scenes and chapters that I know I’ll have a great time writing.

I’m more of a pantser though. Yes, I take notes and send emails but I rarely actually look or read those notes and emails. It’s as if writing them down imprints the ideas on the mind. I even take notes in the word doc when I’m writing but again, rarely read them over. I enjoy reading what I wrote down yesterday as a starting point for writing today. Once the novel is finished I’ll set it aside for a few weeks then go back to it and give it a good once over before sending the manuscript to my editor.

For Fiction Writers: Do you listen (or talk to) to your characters?
I talk to and listen to my characters, carry on conversations with them, and sometimes I develop a psychological profile and treatment plan (I’m a retired hypnotist and behavioral analyst). I also like to do something I refer to as “get inside the head,” a process where I’ll toss on some character or scene relevant music and play out the scene in my head as the character. what are they thinking, feeling, sensing, and smelling? What emotions are welling up in those veins, heart, and mind?

What advice would you give other writers?
Write what you love and what you know. Research the industry, take advice from fellow authors but make sure you learn what you love to do and not just follow what everyone else is doing. You’ve got to find your own way. The indie author journey is a marathon not a sprint to the finish line. Take your time and do everything with patience and care, knowing that the seeds your planting now will manifest when you least expect it. And above all, love every minute of the journey, find joy in what you’re doing no matter what obstacles come crashing down to block your path. Just step over them and keep moving on.

How did you decide how to publish your books?
My books are published through Quill and Birch Publishing, they are a small publishing house in Florida. I’m also a bit of an anti-establishment type of person so traditional publishing was not a direction I wanted to go in. Plus I’ve had a good amount of friends who have been employed by traditional publishing houses over the last few decades, and after conversations with them about the industry, I preferred indie publishing. Nuff Said.

What do you think about the future of book publishing?
Considering we’re in an epic indie publishing era likened to the Pulp Fiction era that took place from the 1920’s-1950’s, I can see the publishing industry turning into a new renaissance for story telling. Unfortunately indie publishing started with a bad rep, beginning with the old Vanity Publishing industry, and the unfortunate fact that so many unworthy books were indie published over a period of time. So many people just published a book without any thought behind putting out a good product. However, this has changed over the last decade or so and most recently over the last few years. Editing and book design industries will continue to grow as indie authors seek to provide readers with the best experience possible. But like every other industry a few authors will stand out and the industry will hit a plateau, although it will take some time for this to come to fruition. In the meantime, enjoy all the books available. There really are hidden gems in the indie publishing world, seek them out, read, and leave a review.