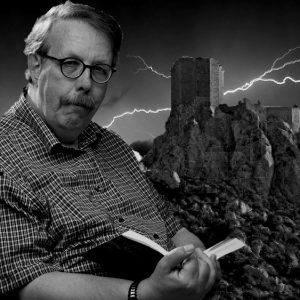 About Paul E. Horsman:
Paul E. Horsman (1952) is a Dutch and International Fantasy Author. Born in the sleepy garden village of Bussum, The Netherlands, he now lives in Roosendaal, a town on the Dutch-Belgian border.

He has been a soldier, a salesman, a scoutmaster and from 1995 till his school closed in 2012 a teacher of Dutch as a Second Language and Integration to refugees from all over the globe.

He is a full-time writer of light fantasy adventures suitable for a broad age range . His books are both published in the Netherlands, and internationally.

His works are characterized by their rich worlds, colorful peoples and a strong sense of equality between women and men. Many of his stories, like The Shardheld Saga trilogy and The Shadow of the Revenaunt books, have mythological or historical elements in them, while others, especially Lioness of Kell and his upcoming Wyrms of Pasandir books, contain many steampunk elements.

What inspires you to write?
I don't know if you can say 'inspire'. To me, writing is as much an escape from the real world as it is for many readers.
Some authors counter the blackness in the world by adding their own. I try to lighten it by writing light adventures.

Tell us about your writing process.
I'm a chaotic pantser. My whole storyworld is inside of me, beating to get out. The trouble is, to let it out coherently.
I have no fixed plan to begin with, though I have a general sense of the plot and a probable ending. Everything in between is fluid.
As I write, things happen, people join and the story unfolds.
This sounds easy, but it isn't. Oversight is my biggest problem these days. Because of a small but pernicious stroke I had last year, my brain has trouble concentrating, so getting things down in the right order is more of a struggle than it used to be.
Countering that has become part of my writing process. I force myself to do it more slowly, and reread more often to keep track of the story. In the end I'm still getting where I want to be.

For Fiction Writers: Do you listen (or talk to) to your characters?
I am there with them, I listen to them, and write it down. (That's why I have the awful flaw of writing too much dialogue).

What advice would you give other writers?
I rather don't The writing world is awash in advice and I am loth to add to it.
Write what you like, really like, the best you can.

How did you decide how to publish your books?
My first three (Dutch) books are trade published in The Netherlands.
When I started writing in English, I decided to self-publish. To me that is part of the fun. Waiting on the mercy of agents and publishers would haunt me to death, and I'm not in it for the money.
Again, I would rather not advise. Both ways are fine, both ways depend on many factors.
But self-publishing is only a path to walk when you are committed to offering a professional product.