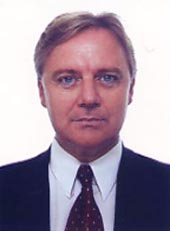 Author Bio:
Paul Adams was born and educated in Hampton, England, before spending five years at Lancaster University trying to get a degree (English Literature, so he knows a bit about books, & Geography, so he can find his way to the library). With so many distractions (the sex & drugs & rock and roll) it was a serious struggle, apparently.

After graduation, he was part of the alternative comedy scene in London in the 1980’s, before realising that maybe he should get a ‘proper job’.

After twenty five years in the Civil Service in London and Bristol, he decided to ‘get a life’ and resigned to dedicate his time to writing fiction and designing gardens.

Two further novels in the series are also planned, one (Bad Man Rising) for release in 2014, and the second later that year (as yet untitled). These will make up the Henry Blythe series of novels. There may well be more.

He will also, at some time in the future, branch out into crime fiction, which is where his professional background lies.

He now lives in Western Australia, where the beer is not as good but at least it doesn’t rain as often.

What inspires you to write?
I like to make people laugh.

Put all three together and you get the ‘Henry Blythe’ series of novels.

Tell us about your writing process.
I wrote Time Was in just two months. I had the idea of an outline in my head for maybe a year. It just all poured out when I sat down to write. I had done over 150 pages before I had to sit back and think of a way to expand the final copy to around 80,000 words (250 pages). I had no synopsis to work to (except what was in my head), although I did make notes as wrote so that I didn’t get characters and plots confused.

Book 2 – Blythe’s Spirit – was also written in about 8-9 weeks. I got the idea two quotes from Noel Coward’s play of (nearly) the same name. It was a ‘what if’…… Again, no synopsis to work to. Just an idea that flowed once I got started.

And new ideas come to me as I write.

Book 3 – Bad Man Rising is also a comparatively quick write but for a different reason. It’s semi-autobiographical, so much of what I’m currently writing actually happened. It’s just been tweaked a little!

What advice would you give other writers?
Read a lot – See what other writers in your genre are writing. Don’t copy them, but see what makes them a good writer.
Keep writing – It is unlikely that your first book will sell many copies. The more books you have out there, the more likely it is that people will find you.

Quality – If you can afford it, pay a professional to format, edit, proof-read, cover design your books. If you can’t afford it, do the very best job you can yourself and enlist friends to help. I did 1 month of re-reads for my books before publishing. It wasn’t enough. I was still finding errors months later.

Remember that a good cover is essential. It’s what potential buyers will see first.

Marketing – read writer’s fora for marketing tips. You need to be very well informed to get your book noticed. I have read some books that frankly were awful but sell because the author understands how to market. 20% creativity & 80% marketing.

Self publicize – get a website, blog, Facebook page. Join Goodreads. Complete your author profile on Goodreads and Amazon. Chat in writer’s fora and on blogs. Get noticed.

How did you decide how to publish your books?
There is little chance of an unknown writer getting a traditional publishing deal, so self publishing is really the only option.

I have both ebooks and paperbacks out for both books.

It can be done!

What do you think about the future of book publishing?
Heaven knows.

Ebooks are supposed to be only 20% of the market though I have read recently that in the US this has now increased to over 50%.

I sell more paperbacks in the UK than in the USA.