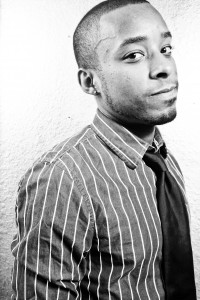 Author Bio:
Patrick Anderson Jr. received his BA in English from Florida State University and his MFA in Creative Writing from University of Central Florida. He has had short stories and essays published in various e-zines and print journals such as Prick of the Spindle, Silverthought, Miambiance, Sex and Murder Magazine, Ghostlight Magazine, Existere Journal, Midwest Literary Magazine, and The Worcester Review. His short story collection, Boiling Point, was released in March 2013, and his first novel, Quarter Life Crisis, will be released in August of 2014 (GetOverCollege.com). Patrick currently resides in his hometown of Miami, where he splits his time between bartending, writing, and doing things he’s not supposed to be doing.

What inspires you to write?
Nowadays everything does. I write on a daily basis for about 2-3 hours a day, so I’m constantly looking for the little details of reality to put into whatever I’m working on. Like the other day, I was driving home after eating lunch and I saw two people sitting at a bus stop, one an old man with a beard wearing an army fatigue jacket, the other a young, beautiful woman wearing a skirt and a tank top. She was sitting a few feet away from him, but they were talking, and I remember wondering what they were talking about. Something like that will definitely make it into a future story.

Tell us about your writing process.
I feel like my writing process is weird. I typically write my first drafts off the top of my head, just get out everything I can: characters, plot, tone, all of that. What I end up with is a jumbled mess with no real narrative arc, but it’s sort of like the outline before the outline. Then I take that first draft and use it to make an ACTUAL outline, which is what I use when I go back to write a more coherent second draft. This is only a process I’ve been using the past couple of years though, and only for my novels. Short stories I typically just write in the flow of the moment, then spend majority of the time after revising the crap out of it to make it do what I want it to do.

For Fiction Writers: Do you listen (or talk to) to your characters?
I feel like I have intimate knowledge of all my characters, like they’re people who have been in the room with me while I was writing, peeking over my shoulder and telling me what they would actually have said, which is typically nothing like what I’m making them say in my first few drafts. I tend towards scenes with a lot of character interaction and occasional introspection, so knowing my characters well is a necessity.

What advice would you give other writers?
If you really love it, don’t ever stop writing or trying to publish, no matter how many setbacks you face. Which isn’t really advice, because I’m pretty sure people who truly love the craft don’t have a choice in the matter. Like me, they HAVE to write. So I guess the real advice is to make sure you stay having fun while you’re doing it, otherwise it becomes a chore, which is never good for anybody.

How did you decide how to publish your books?
I went the agent route for a little while, even had one set up to sign me. I think the issue when it came to Quarter Life Crisis though was that it was my thesis in graduate school. By time I started looking to publish the thing, it had already gotten me my Master’s degree, and I’d worked on it ad nauseum with all the professors in my creative writing program, professors who themselves were renowned published authors. So when agents started telling me I needed to change entire characters and plot lines–essentially asking me to change everything the book was about to enhance marketability–I decided to skip the middle man and go my own route. So far the experience has been pleasant yet hectic, which is kind of exactly how I want it to be.

What do you think about the future of book publishing?
Books will always be around, and contrary to popular belief I believe we’ll have more books out there to browse in the next couple of years than ever before. They’ll just be on the internet, and not just on the major bookselling sites but everywhere. Self-publishing is the future of book publishing, which isn’t to say that’s a good or bad thing (depending on what you’re reading, it could go either way). I just think it’s inevitable, the literary version of what happened to the music industry years ago. And yet, music is still here, still being made. So all the screams of panic coming from publishers lately are really just the side effects of paranoia. People don’t like change, and things are changing, but in the long run I think it will be good for the industry.