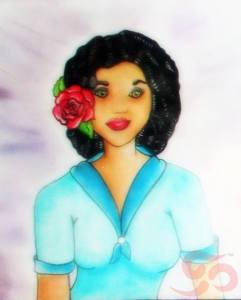 About Palessa:
Palessa started reading her first romance novel, at the age of 11. Then she got introduced to V.C. Andrews, Barbara Taylor Bradford, Anne Rice and many more notable contemporary authors as well as some of the classics, A Tale of Two Cities, Their Eyes Were Watching God, The Great Gatsby and others. It was during her teenage years that she dabbled in writing. First, it was in her diaries, then she started creating characters, stories about romance, the supernatural and much more.
It would take almost 20 years, a radical move from the city she grew up in, Miami, FL back to her Caribbean birthplace, and a chance Facebook meeting with Sable Hunter to start the juices flowing again.

After some fits and starts, the Baxter Family Saga was born. Unchained Hearts is Palessa’s first published fiction book with Beau Coup Publishing. She considers herself just a storyteller that sees no reason to shy away from the juicier romantic elements. She currently lives in the mountains of Jamaica with her crazy, cracker-munching-mutt Ivy and a farm, primarily managed by agribusiness partner, also known as Dad.

What inspires you to write?
I have these ideas that have been percolating for a while in my head. For years. Now I get the chance to let them out and see what I can do with them. So I guess you could say that the ability to really explore these ideas is what keeps me inspires me and excites me.

Tell us about your writing process.
My method starts with me just putting the idea on paper. I guess you could call it an outline. Then I write it out. There are times when the story does follow my general outline, which is not a rigid outline with roman numerals and bullet points. Other times, the story just unfolds differently and I don’t fight it because I feel like I’m just a storyteller who is just relaying the story as told by the characters.

For Fiction Writers: Do you listen (or talk to) to your characters?
Both! They pretty much come to me with a story and some are open and free flowing with the details. Others I have to cajole and just talk to so that I can get the story

What advice would you give other writers?
Follow your bliss. I know there’s that piece of advice floating out there telling people to write what you know…I don’t agree. I think if something fascinates you but you don’t know about it, research and go from there. If you’re scared of a subject, think you know everything about a subject…research, learn and write about it. Don’t limit yourself. Just write and let the genre classification stuff get handled later.

How did you decide how to publish your books?
I was in a conversation with Sable Hunter about publishing nonfiction and that’s when I found out she started Beau Coup. There was this fiction story floating in my head. I hadn’t written fiction in years and really thought there was no way I could write fiction at this point because that time had passed. Ideas dried up and I was just done with fiction. But the idea had other “ideas.” I played around with it, wrote it out and found I felt really good about the story. I submitted it to BC and went through the process of bringing The Baxters to life. It was a shock and I have been happy ever since.

What do you think about the future of book publishing?
You know, I have no idea. I am still learning about the industry and watching other authors do their thing. The fact that indie publishing has been cracked open is fascinating but it’s still a bit fractured. Perhaps, one thought of the future of book publishing is that more writers will figure out their marketing flow. I think marketing is still a “dirty word” for writers but if you want to get some notice, you need to put yourself out there in front of readers. Social media is great but there are a crop of new sites like Tsu that are geared towards connecting writers and readers. Perhaps networks like this will find ways to bridge the reader/writer gap in a meaningful way somehow, helping the indie world to be less fractured.