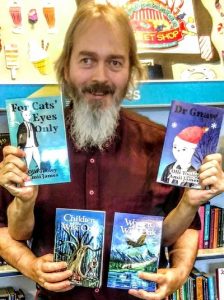 About Oliver J Tooley:
Oliver struggled in school with writing, finding the simple act of holding a pen uncomfortable. He made countless mistakes, and spent most lunchtimes kept back in class to finish his work.
His teachers described him as brilliant but lazy, and said "you'd forget your head if it wasn't screwed on".
Oliver tested this hypothesis by attempting to unscrew his head, when no-one was watching. From this experiment, Oliver concluded that his teachers were idiots.
Another thing they said was, "It's never you is it? It's always somebody else!"
It was one of the few things that Oliver agreed with.
It turns out, that Oliver is in fact autistic, but barely anyone knew what that was in the 1970s and so he went undiagnosed. It was only when his son was diagnosed as having Aspergers Syndrome, that the penny finally dropped.
After leaving school, Oliver had a long list of jobs in retail, driving, removals, and a three year stint selling life insurance commission only. He has also been a singer in various bands, including seven years as the lead singer in Led Zep Too (obviously a Led Zeppelin tribute) performing all over England, as well as in France, Netherlands, and Germany.
He began writing when computers saved him from the discomfort of holding a pen, starting out creating a website about his grandfather, the plant collector Frank Kingdon-Ward, and then writing his first book, a children's story (under the author name Olli Tooley) "Time Tunnel to Londinium".
This has expanded to a four book series, with a fifth book planned for 2018.
Oliver's first full novel came out in 2016; "Children of the Wise Oak", a historic fantasy, set in iron-age Britain, Gaul, and Republican Rome. The sequel, "Women of the Wise Oak" was published in 2017, with the third in the series, "Men of the Wise Oak" due for 2018.
In addition to self publishing his own books, Oliver set up Blue Poppy Publishing, which is a collective of self publishing authors, using the name and logo, and pooling our talents and social media reach for mutual benefit. The imprint has five authors, soon to be six, and a total of 13 titles, which will rapidly grow during 2018 to (estimated) 20 by the end of the year.
Oliver lives in North Devon with his wife and four kids.

What inspires you to write?
My first book was inspired by my 8 year old son telling me he found history boring. He was studying Roman Britain, so I wrote about a boy who travels back in time to Roman Britain.
Other books have been inspired by different things, but my kids are a frequent theme.

Tell us about your writing process.
I write in bursts. I spend weeks doing everything but actual creative writing, and then will smash out several thousand words in a day.
I'm mostly a 'pantser' but I do plan a bit. There will be a list of plot points and ideas, as well as, for longer books, copious notes in separate files. I research facts to ensure my stories do not create major historical or cultural anachronisms. (That's part of my autistic side)
I tend to go back over what I have written before moving on, so the longer the book gets, the harder it is to finish.
I also find myself going back several chapters to re-write bits to make them fit new ideas that come to me while writing, which makes a mockery of any efforts to plan.

For Fiction Writers: Do you listen (or talk to) to your characters?
Sometimes, I discover things about my characters which had not been obvious at the start.
The most extreme example of this was 'Gwenn' a female mage, who is also a strong fighter. She is originally of the Cimbri tribe, who were annihilated by the Romans under Marius, but her father married a Helvetian woman and became part of their tribe which was culturally Celtic.
She is a shapeshifter, and a gifted healer.
The part of her story that I had not planned was that she is also a lesbian.
When I first introduced her, I established that she could not have children, and that she was not interested in any of the men who admired her, but I never really had a reason why in my own mind. Then as I was writing "Women of the Wise Oak" in which she is the central character, she just sort of "came out" and everything made perfect sense.

What advice would you give other writers?
Oh gosh. I honestly don't know if my advice is worth a bean at this stage.
What I would say is, all those people who said "get a professional editor" who I ignored in the early days, were right.
Everyone, even the most perfectionist writers, should have another person PAID to make their work better. Your mate who is OCD or your sister who is a teacher, are no substitute for a professional editor.

How did you decide how to publish your books?
I never had any intention of seeking a traditional publisher.
Rejection is not something I take well, and I am well aware that rejection is the norm in seeking a publisher.
From the start, I knew I would self publish, and I see little prospect of ever going with a traditional publisher, since, by the time they notice me, I will no longer need their help.

What do you think about the future of book publishing?
I think it has a good future, but I couldn't begin to guess what form it will take.
Right now, it looks like e-books have reached market saturation, with physical formats holding their own at around 60%-75% of the market, but that could snap without warning.
I do see e-books becoming more sophisticated, with more interaction. I also see 'video-books' becoming a thing and perhaps replacing some of the e-book and audio-book market.