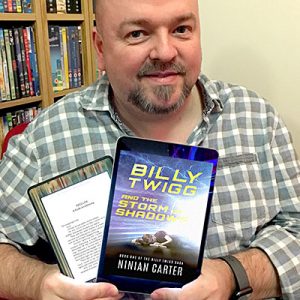 About Ninian Carter:
Ninian Carter is a prominent British infographic artist who's worked for a variety of major newspapers and agencies around the world in a career spanning twenty-five years. Renowned titles he's worked for include The Scotsman, The Observer, Reuters, The Sydney Morning Herald and The Globe and Mail. Born and raised in the Scottish Borders, he lives in West Yorkshire, England, with his partner and two children. A few years ago, he rekindled an almost forgotten passion for writing, subsequently finding success with his first novel, Billy Twigg and the Storm of Shadows — written almost entirey on a smartphone while commuting to work by train. The sci-fi adventure story was selected for publication by Kindle Scout in 2016, and first published by Kindle Press in 2017. On week days, he can sometimes be found feverishly penning new stories on his smartphone, while travelling up and down Britain by train.

What inspires you to write?
I'm lucky in that I frequently have crazy dreams which I write down when I wake up. I have a couple more books in the works inspired by dreams.

Tell us about your writing process.
I find the best time to write is on the train. "Billy Twigg and the Storm of Shadows" was written almost entirely while travelling between Cambridgeshire and London by train.

For Fiction Writers: Do you listen (or talk to) to your characters?
I listen to them. I feel like a reporter taking down notes. My characters are most definitely "alive" in my head and living very exciting lives too!

What advice would you give other writers?
Find a time of day that suits you. Even if it's just half an hour a day. Find it and write. Do it every day you can. Don't give up. Just keep going. It took me three years of writing on trains five days a week to finish Billy Twigg!

How did you decide how to publish your books?
Originally I was going to self-publish in Amazon, but then found out about the Kindle Scout program and so entered their competition. Lucky for me I won, and received a publishing deal with Amazon Publishing!

What do you think about the future of book publishing?
It's awesome. It's getting bigger and opening up to all kinds of new potential writers.

What genres do you write?: Sci-fi, fantasy, thriller, horror