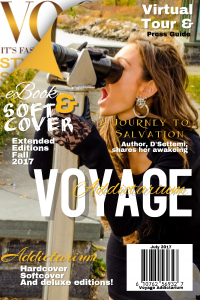 About Nicole D'Settēmi:
Author Nicole D'Settēmi is a 35 year old writer, currently living in upstate New York. She has lived in five regions nationally, including South Florida and New York City. She has always been a self-described "poetic, nomadic, creative soul," and is an enthusiast of a variety of artistic mediums, but considers writing her number one form of art, and feels everything else is just an extension of that passion and creative outlet.
Nicole was raised in Niagara Falls, a tiny town bordering Canada, and can remember being as young as six, when writing her first lyrical, and philosophical poems. She also points out being selected at 6, for the "Young Authors Club," which was a city-wide project.
Nicole won two city-wide essay contests between the ages 9-11, which was when she received her first typewriter and then she started a fan-club and newsletter for her childhood hero, as well as penning letters to over 30 pen-pals internationally.
Though Nicole (who was an honor student) rebelled by 15, and was incidentally expelled from school, she still wrote habitually. She once showed her “alternative-school” teacher a poem titled: "That's Life," which she penned at 14. He was so impressed with the piece; he had it faxed to every school in the city.
At 16 Nicole was uprooted from her small town and moved to Boca Raton, where she felt displaced and started to deal with depression. Hereditarily, mental illness and substance abuse ran rapid in her family tree, and by 20 she experimented with a plethora of chemical substances. By 23, she became addicted to shooting heroin, and was engaged to her co-conspirator and partner-in-crime. She attended an art school for photo journalism, but withdrew half-way through the year, due to a devastating addiction to injecting various drugs.
Addictarium was written while she spent two years in a therapeutic community for seriously addicted, and mentally ill, patrons. The author outlines her experiences, including the tale of losing her eyesight due to shooting a poisoned bag of heroin, which is when she was forced to hitch a greyhound bus from South Florida to Manhattan, and after several weeks of surgeries, was admitted to Daytop Village for long-term treatment, and drug addiction recovery. The book outlines many of the experiences she went through in the second phase of treatment, which she dubbed "the village," because of its extreme and eccentric melting pot of personalities.
During her tenure at Daytop, Nicole separated with her fiancé, and while in her stay at the recovery program in Queens New York, met her current fiancé, who was initially her substance abuse counselor. The book is also highly reflective of their relationship and its roots. Nicole credits the Latin, Brooklyn-bred counselor, 18 years her senior, with "saving her from herself.”
Nicole can now be found residing in the Hudson Valley with her fiancé, Miguel. They are both artists, and run a modest side business creatively assisting those in need of artistic direction digitally. Nicole is currently penning more additions to The War Stories Chronicles – her collection of partly fictional memoirs, poetry books, and more, which all intertwine in some way. Addictarium was the first piece, with NARCOTARY: Chemical Warfare, the second full novel, anticipated for release in 2018!

What inspires you to write?
Good writing, of course! A good book. Anais Nin had a huge influence on my work, as I found her extraordinary and compelling. If I read something amazing, it definitely propels me to pull the lap out and start something of my own.

Tell us about your writing process.
I diary a LOT. I take notes, write down quotes, always write period. I read great writing, especially poetry. I practice, because practice makes perfect of course!

For Fiction Writers: Do you listen (or talk to) to your characters?
Yes. I most definitely feel like I flesh them out to the point, where I almost have a human relationship with them.

What advice would you give other writers?
Don't give up. Be tough, persevere. Be ready for anything and everything. Ignore those who put you down, ignore author bullies. TAKE criticism, constructive criticism is your best friend. Listen to what others have to say, if they aren't just being vicious. If they have something good, or useable, solid advice, listen to what they are saying.

How did you decide how to publish your books?
Through my own small publishing firm.

What do you think about the future of book publishing?
I am concerned the market is flooded. I urge all to be creative and adapt artistic skills, but I am concerned about the quality of some work that sells, now. Writing is precious, and amazing, and should be valued and treated carefully.

What genres do you write?: romance, literary fiction, memoirs, biographies