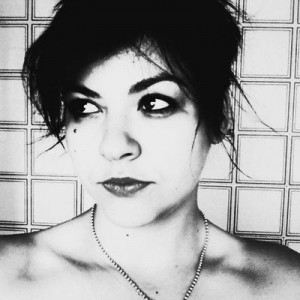 About Nico Reznick:
Nico Reznick is a writer and spoken word performer of ambiguous immigrant extraction. Having spent her early life moving around various European countries as a ‘corporate army brat’, Nico now lives in Shakespeare country with her editor and two feline overlords.

She has appeared as a warm-up act for a number of established poets, and is a regular attendee and guest at local spoken word events.

Nico’s darkly comedic début novel, Anhedonia, and her first collection of poetry, Over Glassy Horizons, are both available on Amazon.

Nico has served stints as a dead-eyed bureaucrat (until realising there’s only so much negative emotion you can bury in spreadsheets), as a purveyor of bad, smuggled wine (statute of limitations since expired) and as a political canvasser and campaign agent (she can tell you how a household will vote based solely on their front garden). While working as a barmaid, she developed the ability to write the word “tw*t” in the foam on a pint of Guinness.

Besides writing, her interests include photographing rust, getting angry about politics and assembling Lego, which – she claims – centres her.

What inspires you to write?
It could be almost anything, from big stuff to small stuff. For instance, there might be a news story that sets me thinking, or a friend could make a totally offhand comment that gets the brain-cogs turning. Random thoughts can linger and evolve and turn into whole story threads or spawn entire poems.

In the case of my novel, “Anhedonia”, I started out with several unrelated bits of ideas that I couldn’t turn into anything. I loved the idea of a character whose conscience told him off in the voice of Jeremy Paxman (famous, long-established UK news broadcaster). I also had a vague idea about a character whose only pleasure in life was “grief surfing”; he’d trick bereaved people into believing he’d also suffered a recent bereavement, using the lie to seduce them into having wild, emotionally explosive sex with him. I knew I wanted to tell a story based around something a friend had told me, about a family tradition that had involved going to furniture stores and fishing down the backs of display model sofas for loose change. There were other fragments of the story knocking about in my head, but I didn’t realise they were in any way connected until I came across the term “Anhedonia” while I was doing some online research. I found out that it meant “the inability to experience pleasure”. Suddenly, I had my title, and all the other pieces sort of fell into place.

Tell us about your writing process.
My process varies depending on what I’m writing and what sort of mood the muse is in. Sometimes, with poetry in particular, it writes itself; I’m just on hand to write down or type (or sometimes text myself) the words when they happen. Other days, it’s a lot more deliberate, a lot less fluid; these are better days for plot-pointing, researching or redrafting. I think the most important thing is that you stick with what you’re workig on, even if you have to change your approach or focus on a different aspect of it.

Writing anything of length, I rely on word processing; I need to be able to cut and paste. Plotting a story out, though, is something I tend to do by hand. I have ideas and story arcs scribbled in notebooks, and I use index cards for mapping out story beats. I’m quite tactile when I’m turning over ideas, so it helps a lot for me to be able to physically shuffle story components until they all fit together right.

I also like having a soundtrack when I write. Writing “Anhedonia”, I had a playlist of songs that hit the right kind of tone for the book I was writing; songs that felt atmospherically appropriate or captured the mood for certain scenes. It helped me maintain focus on the sort of story I wanted to tell.

For Fiction Writers: Do you listen (or talk to) to your characters?
For the most part, my characters are helpfully vocal. They mostly say what they want to say without me having to get involved much at all.

What advice would you give other writers?
Learn from everything you possibly can. You never know what might inform or inspire something amazing, so be attentive and seek out new knowledge.

Redraft, proof-read, train yourself to take criticism well, and learn from your mistakes.

Read. Stay connected with why you wanted to be a writer in the first place.

How did you decide how to publish your books?
“Anhedonia” was a very personal write for me, but I felt that it told a very relatably human story, so I wanted to get it out there where people could read it, to see if it struck a chord. Publishing it as a Kindle book made perfect sense, as it was such a simple and rapid process. Another of the great advantages of the Kindle format is that anyone with a computer can read it, and there’s no delay for readers between ordering and receiving your book, unlike with print editions. If someone on a poetry website likes one of my poems, they can check out my profile, follow a link and have my novel or my poetry collection open in front of them in less than a minute. That’s some pretty cool, living-in-the-future stuff right there. Except for the bit about poetry, maybe.

What do you think about the future of book publishing?
I can see there becoming an even greater divide between established, mainstream, “brand name” authors and writers of more alternative genres and styles. There’s already a tendency in the book industry to try to recreate the current bestsellers (we’ve seen it happen with the likes of “The Da Vince Code”, “Twilight” and “The Girl With The Dragon Tattoo”, amongst others), and I feel like this has really started to hold back authors who just want to tell a good story, who don’t think of creativity in terms of demographics and marketing campaigns. The simplicity of online publishing is a great tool for indie writers, but it can be misused, and we need to be careful we don’t undermine the medium by cutting corners or delivering sub-par material. It should give authors the freedom to tell the stories they care about, to the best of their abilities, but it’s not an excuse to skip on proof-reading.

What genres do you write?: Transgressive fiction, black comedy, poetry