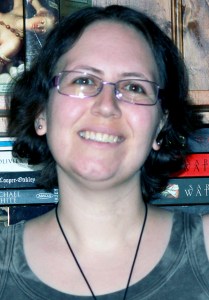 About Nicki J Markus:
NICKI J MARKUS was born in England in 1982, but now lives in Adelaide, South Australia with her husband. She has loved both reading and writing from a young age and is also a keen linguist, having studied several foreign languages.

Nicki launched her writing career in 2011. She published works through Wicked Nights Publishing and Silver Publishing before both companies closed their doors. She is now self-publishing some of her works, including the novella Time Keepers and the fantasy novel The Ragnarök Chronicles.

Nicki also writes M/M fiction under the alternate pen name of ASTA IDONEA and has had several short stories published by Wayward Ink Publishing. She is currently working on her first M/M novella.

Nicki works as a freelance editor and proofreader, and in her spare time she enjoys: music, theatre, cinema, photography, sketching, cross stitch. She also loves history, folklore and mythology, pen-palling, and travel.

What inspires you to write?
That depends. There are times, particularly with my M/M writing, when I will see a prompt for submissions and I’ll ponder it and see if I come up with an idea with which I can work. Sometimes these ideas are fairly instantaneous; other times I’ll need to mull them over a little first. My current M/M work-in-progress I prevaricated over for a few hours before deciding in which direction I should take the piece.

This is very different from my mainstream M/F genre writing. I never write these in response to calls, but always because I have an idea and can’t help but get it down. The variation here is that sometimes it is a character who comes to me first; other times it’s a plot or concept. The initial inspiration can come from many sources: another book; a TV show, play, or film; or sometimes even dreams I had the night before.

In a more general sense, I am inspired to write because I have all these characters and stories in my head, and I love them so much I want to share them with others. That is why I adore being an author.

Tell us about your writing process.
Two years ago, I would have described myself as a seat-of-the-pants girl when it comes to writing; however, this has changed a little in the last year or so as I started to write longer stories with more complex plots and more characters, and now I would consider myself to sit somewhere between the two camps.

Short stories I still just sit and write without much preparation beyond deciding on names, a rough plotline, and a sense of the main characters’ appearance. For novels and novellas, though, I tend to work through the following process:

1) Scribble some initial ideas for plot and characters on paper
2) Mull everything over in my mind for a few hours/days as needed
3) Create characters profiles for the main characters (including physical appearance and personality/background)
4) Jot down some major plot points/chapter points to see roughly where I want to story to go
5) Commence writing!

So, while I still don’t plan everything to the tiniest detail in advance, preferring to see where the characters and story take me, I do give myself a basic path to follow and I make sure I know the characters really well as that helps me decided on their motivations and how they would act in different circumstances.

I tend to do three to four drafts. My first draft is usually the shortest as I mainly want to get the storyline down. The second draft I go back and fill in more detail on character feelings and scene descriptions. And then the third and fourth drafts, I cut out anything unnecessary and tweak the prose.

For Fiction Writers: Do you listen (or talk to) to your characters?
It depends on the piece and how much I connect with the characters. I love all my characters (that’s why I write them in the first place), but some I connect with on a deeper level than others. I simply adore Saul and Tom (from my forthcoming M/M short story A Twenty-First Century Demon and its novella-length sequel Hell to Pay), and as I was writing them, I could picture them so vividly that it really helped inspire me for the story. That was particularly true when it came to dialogue as I could ‘hear’ them saying the lines, and that helped me know if I was on the right track.

However, the deepest connection I’ve had with a character so far was while I was writing my latest fantasy novel, The Ragnarök Chronicles. This story is based around Norse mythology and Loki is one of the main characters. I did talk to him as I wrote, and I really felt he was with me, inspiring me and guiding my hand. In fact, as a result of writing this book, I left a lifetime of atheism behind me and became Lokean!

When I’m deep in the middle of a new work, I tend to live and breathe my characters. I am constantly thinking about them and what’s happening to them at that point in the story, and I often find myself dreaming about them too—which sometimes leads to new inspiration over the direction the story should take.

What advice would you give other writers?
Just to keep writing, and don’t be afraid to follow your dreams. I put it off for years, always saying I wanted to be an author, but then doing nothing about it, and I’m glad I finally plucked up the courage to submit my work. I am passionate about writing, and it’s worth the occasional rejection and disappointment to be able to get your work out there and share your stories and characters with readers.

Also, read… lots… all of the time. The more widely you read, the more you can improve you own writing by learning from the best. Not to mention that it may inspire you and provide the seed for your own next work.

How did you decide how to publish your books?
Initially, my mainstream work was published in a more traditional method by submitting to a publisher and signing a contract with them. However, when the two publishers I had works with both closed, I found myself back at square one with none of my works available for readers. Even so, I first aimed at traditional publishing for The Ragnarök Chronicles only to find the book did not sit nicely into any of the categories (either for content, or else for word count) at the places to which I was looking to submit, so I made the decision to self-publish.

I was further enticed by self-publishing for this title because it has such important personal meaning to me, and self-publishing offered me the chance to retain complete creative control, not only over the manuscript but also over things like the cover design (which I completed myself). Once I decided to go ahead, I also felt that it would be worthwhile re-releasing two of my novellas that had previously been published by Silver Publishing. One of those, Time Keepers, is already out, and Day-Walker will be releasing on 1 May 2015.
For my M/M writing, I am still working with a publisher—Wayward Ink Publishing. I got involved with Wayward Ink first as an editor (and I continue to edit for them now), and then in 2014 I decided to try my hand at penning a tale for an anthology submission call. I’d previously only written M/M in fan fiction, but after doing my first short story, ‘The Raider’, I decided I enjoyed it and wanted to keep writing, using the alternate pen name of Asta Idonea. So I now have three anthology stories out with Wayward Ink, with one more (plus its accompanying novella) forthcoming later this year. I have a great relationship with Wayward Ink, and so at present I have no plans to self-publish any M/M works I write, preferring to stick to the more traditional method for those for the time being.

As to which way new authors should go, I would say it would be a choice based on what they were looking to accomplish and what experience and means they have. I came into self-publishing on the back of diplomas in editing and publishing, with a good basic knowledge of the self-publishing process. This allowed me to complete many tasks myself (such as print formatting and cover design) which could otherwise have been costly. I needed to seek professional help with the EPUB formatting for The Ragnarök Chronicles when the file gave me trouble, but that was my only really major expense. For those who will need assistance with every stage, it can quickly start to add up.

If your book fits nicely into a category with an online publisher and you are completely new to writing/publishing, I would probably suggest having a few stories published that way first. You then have time to promote (and write more) and build up a fan base, while the publisher does all the technical side of releasing your book for you. This way you’ll get a foot in the door and get an overview of the process before deciding if you wish to branch out on your own and self-publish future works. Self-publishing no longer has quite such a stigma attached to it these days, so really, the choice is yours!

What do you think about the future of book publishing?
There’s been a lot of doom and gloom over publishing in recent years, but I really don’t think the industry is in danger, more that it’s evolving for the digital age. I don’t believe print books are going to disappear any time soon as some claim, but the rise of e-books, and self-publishing through POD, is making it easier for new authors to break into the market. Granted, you get those who don’t edit and put out work that is sub-standard, but for the most part indie authors are dedicated writers, and I have read some amazing self-published pieces in the last few years. Rather than publishing dying, I believe it is going to boom, with more works than ever being released.

The only sad thing is that I do think book stores may one day be a thing of the past. I love browsing in book stores, but most of the time I simply cannot afford their prices. Here in Australia, books are hugely overpriced compared to the US and UK markets, and while I would love to support my local stores, I cannot justify paying $40 for a book I can buy for $20-25 on The Book Depository. So I do believe we may come to a time when books are either borrowed from libraries (although they are also suffering at present) or bought online, with fewer physical stores in towns.

What genres do you write?: paranormal, fantasy, M/M