You are here: Home / Interviews With Authors / Interview with Author – Nathalie M.L.Römer 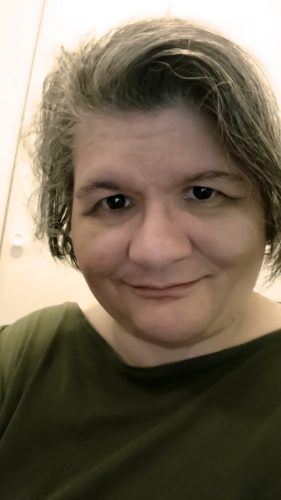 About Nathalie M.L.Römer:
Nathalie M.L. Römer is an author based in Gusselby, Sweden. She lives here with her partner Anders. Before this, she lived for over two decades in Britain. She was born and initially raised in the Netherlands, and later also lived in Curaçao.

Nathalie considers herself a multi-genre author, publishing them under her imprint Emerentsia Publications she co-owns with her partner. Nathalie writes primarily science fiction, fantasy, mystery, and romance, and she's working on books in other genres that interest her. Her Facebook page is the best place to keep updated on the latest developments relating to Nathalie's writing efforts.

What inspires you to write?
It begins when I was around eleven years old and I was waiting for the school librarian. It bore me so I went to look for something to read. Something light… like Lord of the Rings. For me, a kid reading 10+ adult books a day (and I had been doing this for the been doing this for at least 2-3 years by then) it was light reading. When the librarian finally arrived, she saw what I was reading, then proceeded plant my future career choice in my mind: "When you grow up you'll either be an artist or a writer." (I became the writer). Fast forward a few decades and one afternoon I was bored (again!). Being bored can get you to interesting things. In my case I didn't want to play more hours in the MMO World of Warcraft so I took a notepad and pen and wrote a little story, about 1,400 words… It's now one chapter of my novel Tainted Truth. A few days later I was playing the MMO again, and then I realised. It had this expansive world with monsters, and adventurers, and many things that happen to the heroes of that story. I had a lightbulb moment. I realised suddenly I could write a similar expansive world and so Keldarra was born. Then I remembered my short story and started working on how my world could look (I'm also an artist so I drew a map). A few days later the idea of "Wolf Riders" was created, and a few weeks later the world existed. What I write about are real things from our world which I just change to fit into a fantasy world. I like to write about people who fight for what they believe in, who want to trust those around them, who hope for a better future. I'm a "glass half full" type of person by nature so what really inspires me is to give people hope.

Tell us about your writing process.
I outline the broad strokes of a story but I like to allow scenes to evolve so much between the beginning of a chapter and the end of it is by the seat of the pants, but I always know what the outcome is of each chapter and ultimately the whole book. Typically, I write the last chapter first. I like to know how it ends. I plot backwards towards the turning point in the story and write the beginning and plot forward to the turning point. Then I get writing. I make constant notes in the story of what goes on as I write. It helps that I use Scrivener. I also find images that help me find the mood of the story but I never really do any description of what a character's appearance is until I'm finished with their scene in the book or with the book itself. It should base their appearance on the personality I created not the other way around. I'm someone who believes beauty is in a person's soul before it is in their outward appearance and my stories reflect that.

For Fiction Writers: Do you listen (or talk to) to your characters?
My characters live in the worlds create, and when I realise there is a character a story needs I ask: Who are you and what purpose do you serve in your world? I guess I listen to the character at that point and I write them well even if they're there just for one scene. Like in our world where you may only see the person behind you in the queue in the coffee shop just once in your whole life and where you wonder "Why did he wink at me?" similarly your character needs to feel they matter in the world rather than feeling like they're the annoying hangnail. So when a character pops into your mind make them have meaning. Even if it's for that one paragraph. (Btw, my editor and proofreader both said I do good characterisation so I guess something about this approach of writing characters into a story is working.)

What advice would you give other writers?
I will start with the advice given to me by my friend and fellow author Orna Ross: "The more you write the better you get at it."

She's instrumental with this single sentence in stopping me giving up on my writing when things felt too tough for me. Because of her I've turned from someone who felt an obligation to meet a certain standard to someone who writes for me. If I write for myself I'm not forcing the voice I used to write with, and it is far easier to let the words flow out. My father gave me the other bit of advice: "Only ever write for yourself, and not to live up to another person's expectations." He meant by this that, if for example you're named Joe Bloggs, to write as Joe Bloggs and not try to be James Patterson.

Also, don't fall in the trap of answering the "that's not a real job" if ever you're asked what you do for a living. My answer is instead "I run a publishing company." Because as an author you are creating products that you sell, market, advertise, etc. You are a business owner with the responsibility of dealing with editors, proofreaders, cover designers and others. You are a business owner with bills to pay, tax to process and other responsibilities. Just tell the person asking what you do for a living: "I run a business." It eliminates so much of the stupidity that the reply "that's not a real job" or "that's a hobby" brings. Look at my answers here. I wrote them. I applied my creativity to answering them in, I hope, an entertaining and fun way. The only way I could write this effective is by doing a lot. As Orna says…the more you do it, the better it gets.

Final word of advice. Get savvy with the editing. I do FIVE rounds of it nowadays (now that I'm so much wiser compared to early 2016). First round, is me editing by my own language skill only. I call this the "improve my English" phase. The second round is using Grammarly. The third round is with ProWriterAid. Then I recheck everything with Harry Dewulf's Edit Ready (yes, shameless plug as his advice and this book has helped me overcome a lot of self-doubt regarding "show vs tell" – he says it's okay to do both in a story). Then I get a developmental edit done, followed by rewrites and then followed edits by a copy-editor. An editor will do all editing professionally. It also gets professionally proofread. It will be what sets you up for the long-haul of a steady upward trend of getting better known. I know that one day I'll write that ONE book everyone will rave over. All the above is the process that prepares me and pushes me towards that moment.

How did you decide how to publish your books?
One day I was on YouTube and (in around mid-February 2016 I think) and randomly this video got suggested to me. It was a video of Joanna Penn (The Creative Penn) describing the differences between traditional publishing and indie publishing. Up to that moment I had a vague idea that it existed but never realised up that moment what it involved. After the video was over, it converted me to the indie author camp, even though I plan I will try to submit a few books to agents for traditional publishing further down the road, but I'm definitely here to stay. The reason I chose this camp is simple. It offers me more creative control over my work. However, as a new author you need to weigh up the choices really carefully because you cannot compare your writing to someone else's ever.

Also, I'll add a word of caution: if the publisher asks for a payment from you to have the work published run a mile in the other direction. There is Draft2Digital, Kobo, Smashwords, Ingram Spark, Kindle Desktop Publishing and PublishDrive that offer book and/or ebook publishing services with NO cost to you, and with them you can do everything without spending a penny or very little cost. It's a juggling exercise to keep track of everything. In the greater scheme of things being an independent author changed how I do stuff. I'm more organised, more disciplined. I learned to be more patient. I learned more people skill. I learned better writing skill, even re-embraced my artistry skill too by designing some of my own designs (so I became a writer and an artist really). Just persevere and look at this as a long-term goal.

Learn, learn, learn is the key to being successful in every part of what you need to do to run your independent publishing company. Respect those who are already established. Listen to advice. Don't dis!…EVER! Be kind. Be humble. Be self-aware. Be resilient. Be happy. Be positive.

What do you think about the future of book publishing?
There are three clear paths I can see. The first one is physical books. They must keep existing. It was a physical book that got me interested decades later in a career as a writer.

However, I can also see the value of ebooks. They're evolving too. The technology of presenting a book is getting better. For example, Amazon's Xray service is a handy tool for author's to "talk" to readers about their thought patterns relating to a word used or a scene shown. It connects me to a reader and I think this is something that all e-reader services and e-book developers need to do.

The third path is one I'm only just embracing but to me has the highest potential. Audio books can bring literature to the masses who are illiterate. Six years ago, the magazine, Good Reading Magazine, suggested in an article almost 800 million. Personally I think it may now be a billion. Audio books can bring the word-smithing to those people. It can still enrich their vocabulary because of it and teach children new things of the world outside the places they live in.

What genres do you write?: Epic Fantasy, Futuristic Sci-Fi, Mystery, Romance (for now)