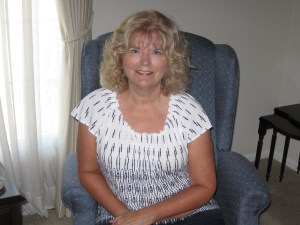 About Nancy Pennick:
After a great career in teaching, Nancy found a second calling as a writer. Ohio is her home but she loves to travel the U.S. Her debut novel, Waiting for Dusk, was a surprise to her as much as it was to her family. Watching a PBS series on National Parks, her mind wandered to another place and that is where the characters of Katie and Andrew were born. The Swedish influences found in the book came from her mother whose parents emigrated from Sweden. Waiting for Dusk is the first in her three book series. Call of the Canyon and Stealing Time continue the story along with the addition of a short story, Taking Chances.

What inspires you to write?
I always have been a reader and enjoyed books. I wrote short stories when I was in school, kept a journal. So the writer was always hidden in there somewhere.
Visiting National Parks became a recent passion. My husband and I had just returned from the Grand Canyon. A PBS series about National Parks was going to air and we decided to watch. My mind drifted to another place. I began thinking about the recent park visit, the history I just saw on TV and how fun it might be to have a young girl move between the past and present. I had no intention of writing a novel. So it literally happened overnight.

Tell us about your writing process.
I found I do not like outlines. I tried, I really did. Then I discovered I was trying to think up things for each chapter just to jot it down on the outline. I can’t start with just an idea either. Sitting in front of my computer waiting for the plot, dialogue to come to me doesn’t feel quite right either. So I guess I’m a combination of a planner and someone who wings it.
The story starts in my head. I map out my main characters, their names and relationships first. That is usually kept in a folder I call “Notes”. Most research is done on-line and I keep those things in a folder with the books title. I know my major plot points, how the story will end, but I plan out each section as I write. Sometimes things change for the better. A secondary character may take on a life of his/her own as in Waiting for Dusk. Erin was just a means to an end when I created her. Suddenly she was whispering in my ear that she wanted a bigger part. Tyson wanted to be darker, not the nice kid next door. That’s the fun of writing.

I don’t write the whole first draft from beginning to end without stopping. Some authors do. I have to reread my story as I go along to make sure I didn’t miss any plot points.

I had a high school student ask me how I keep track of all my characters. I told her they were all in my head and she gave me a look of shock. I explained we’re all different and everyone should use what works best for them.

For Fiction Writers: Do you listen (or talk to) to your characters?
Of course! As I said in the previous questions, characters sometimes have minds of their own. I had to go back to chapters I’d already written and adjust them for Erin’s part in the story. Sometimes I hear, “I could do that,” as I plot a new scene. If it works, I’ll agree. If not, we may have an argument over character traits. One of my weaknesses, if you can call it that, is not making characters dark enough. I try to see the good in people and want to reform them by the end of the story. Sometimes I can and sometimes not, just like real life. And who doesn’t love a villain?

What advice would you give other writers?
Write every day. Don’t give up. Ask someone you trust to read your first draft. Tell them not to go easy, tell the truth. Learn how to edit. Take criticism in a positive way. Love what you do.

How did you decide how to publish your books?
It took about two years to get my book published. I gave up trying to get an agent and follow that route to a big publishing company. Instead I began to research what else was out there. I found out about small press and on-line publishers. Thank goodness for them! I sent my manuscript to four or five places and heard back from two with offers. That made my day.

What do you think about the future of book publishing?
Book publishing has changed so drastically in the past few years, it’s hard to say. I like that there are many ways to get a book out to the general public. People have choices. So do readers. There are more and more books flooding the market place. The competition is greater. I can’t see that ending. I’d love to see small press publishers get more credit and an chance to expand. Traditional publishing has been in control for a long time. My personal opinion is that if your book can’t be turned into a movie or you’re not famous, they (tradition pubs) don’t want you. That’s why I champion the little guy and work for a review site that only reviews small press and indie novels.