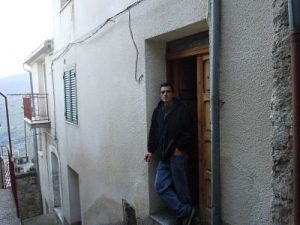 About Mike Masi:
I was born in the United States and grew up in a bulging household of foreign-born relatives. In this I was blessed. I’ve lived in many places and enjoyed a number of professions. I began as a dancer performing in nearly every major concert hall in the United States, among them, Carnegie Hall and Kennedy Center for the Performing Arts. Knee damage led to jobs as an accountant, waiter, oilfield roustabout and commercial airline pilot. I was fortunate to have flown DC-3 aircraft for twelve of my twenty-five years as a pilot. The cat that appears in the book is an old girl now. Her name is Alice. And I’ve become the foreign-born relative. I live near the Adriatic Sea in an ancient hilltop village of stone houses and narrow streets. I rarely see an airplane in the sky.

What inspires you to write?
The inspiration for this, my first book, came from the overwhelming reaction of the family, friends and acquaintances that heard the story first-hand, in that, the fascination was not focused on the plane crash itself but on the questions of choice, mortality, one’s confrontation with imminent death, luck and divine intervention.

Tell us about your writing process.
Since mine is a non-fiction book, there wasn’t much preliminary work that was required. The story and all of the particulars were already there. I lived it. My task was to write from the heart and illuminate what was hidden behind the facts of an extraordinary event. It is my desire that the story presents some small gift to the reader. Otherwise, this was just another airplane crash.

What advice would you give other writers?
This is my first book. I don’t have advice for writers except to say that if there is a strong desire for anything in life, just do it. The impossible is accomplished all the time, only self-imposed limits prevent this from happening.

How did you decide how to publish your books?
The opportunity to self-publish was a no-brainer, since I don’t like the idea of someone else determining my fate.

What do you think about the future of book publishing?
I imagine that ebooks will surpass print books as the platform for the written word. I suppose that most people eventually warmed to the idea of papyrus rather than stone. The advent of ebooks and self-publishing took the control away from the small group of people who determined what was fit for the rest of us to read.

What genres do you write?: non-fiction