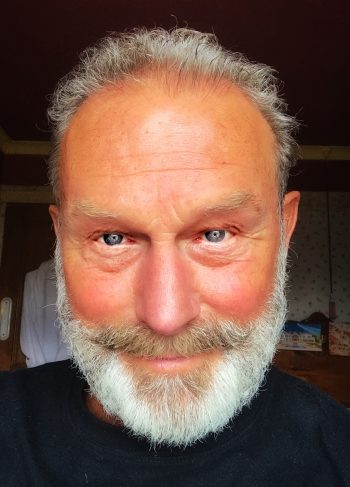 About Michael Ross:
Coming from an acting background, it was a clairvoyant who suggested I start writing, and I haven't looked back!
Always been an avid reader of Sci Fi and fantasy and settled on Epic Fantasy with a twist! Having an imaginative mind, I wanted the adventures to feel as real as possible, even though they included, elves, fairies, orcs and humans. This culminated in my four book Wand Chronicles series. I designed a board game, of the same name, to accompany the characters and adventures in the series. It went on to win a place in the top ten best board games in the UK for 2019. Another of my books I also narrated and that went on to win the 2019 Independent Audiobook Awards. I'm presently writing an fantasy adventure series entitled The Big Fairy Adventures, and for inspiration built a huge fairy garden, now open to the public, and has a constant stream of visitors.

What inspires you to write?
As a small boy, I was home schooled and left to read. Michael Moorcock introduced me to fantasy writing. I became a voracious reader, Tolkien, James Barclay, Asimov etc. But that 6-year-old's imaginative mind has stayed with me. I have a mind that tends to wander when it is quiet, and adventures are tumbling over each other to go down on the written page.

What authors do you read when you aren’t writing?
Charles Dickens, Jane Austin, Terry Pratchett, Tolkien, James Clavell, George R.R.Martin and James Barclay.
To be honest, I tend not to read other authors when in the middle of my own series of books. I like all my imaginative ideas to be mine and not have influences creeping in from someone else.

Tell us about your writing process.
So okay. I'm not normal. Tried the usual route. Take a thought and genre, plan out the characters, the chapters, the beginning, middle and end. But I was struggling to do that. Something was stifling my creativity. It was all too regimentated. So for me, I will come up with a story in my head that I could sit you down and tell you in its entirety in fifteen minutes, with a beginning, middle and end. But when I am writing, I will have a basic idea of what happens in a chapter, but then, as I start writing the characters come to life, the twists and turns of the plot all happen as I write. The danger here of course is that, I needed to know, is my writing good or bad? The only way then are for Beta readers and reviewers to tell me I am on the right track, and after many reviews by ordinary readers and professional reviewers and bloggers, I now know I am. I write every day, more or less, because I like to keep my head swirling around with creative ideas and keep in the moment.
Because I come from an Acting background (method acting) I make my characters as real as possible, though they may be a fairy or an elf. I will know them so well. I will know what they like to eat, what hobbies they have and so on.

For Fiction Writers: Do you listen (or talk to) to your characters?
Yes I talk to me characters all the time. I try not to do that in public. With my Wand Chronicles, we are talking nearly 400,000 words. When I had finished, I missed my characters. In fact, in my current series, The Big Fairy Adventures, I have brought some of my favorite characters with me. I always adored Dickens and his characterizations, and so it is with mine, they are not your normal plain characters. I have a very affectionate character who is Chinese called Ding Ling. Very brave, but brings humor into the adventures and will insist in quoting Confucious (incidentally, this character is one that my Beta readers pleaded with me not to 'Kill off'.) But who knows where the story will lead?

What advice would you give other writers?
If the act of sitting down and writing is difficult, try something that is completely different. Record your self speaking a short story. It doesn't matter if you mess up, but ideas will be there. I can be outside the home, maybe even shopping and a plot line, an idea will come into my head, I quickly jot it down on my cellphone. Even in the middle of the night, I will speak to my recorder (quietly) and remember a course of action. There are times when a particular plot is difficult, and you don't know how it will resolve? I always sleep on it, and let my magic mind work it out and come up with an answer. It has never let me down yet!

How did you decide how to publish your books?
I knew the journey to finding a publisher is tortuous and difficult. And I did try, and had some hopefuls but most were rejections. So very soon onto my writing process I decided to self-publish using Amazon KDP. A word of warning, to my detriment, I made the mistake of putting all my eggs in the same basket. Don't. So I also publish on Kobo, Goodreads, Draft2Digital and others

What do you think about the future of book publishing?
Well, since I am an indie publisher, usual publishing companies don't interest me. There are too many pitfalls for my liking. Your control over the books, the blurb on the back, the design of the cover itself, the formatting, may all be taken away from you. Not forgetting the cut the publishing companies get for publishing your books. Technology is improving all the time, even in the six years I have self-published. The time is very close when you could create a very professional book on your own. At the moment, the big step comes at the very end of your journey, the advertising and marketing. That certainly needs improving.

What genres do you write?: I have written True-Life, all ages of Childrens books, comedies, but my passion is realistic epic fantasy